One of the statistical quirks found by Prof. Geoffrey Moore, the founder of ECRI, is that even though the data is only monthly rather than weekly, short term unemployment (0 - 5 weeks) usually bottoms before initial jobless claims.  At least insofar as the limited data set I've been able to examine, that is true.  Short term unemployment bottomed first prior to 5 of the last 7 recessions.

In view of the theme that the rate of hiring generally leads the rate of firing, that makes sense.  As the economy weakens towards recession, while the rate of firing may not go up, or at least not by much, more and more of those recently laid off are unable to find new jobs quickly.

Beyond that, at least since the 1960s, there is a good measure of how much a deterioration of short term unemployment is necessary before the economy enters recession.  In each and every case, with a lag time of not more than 7 months, and usually much shorter, the number of short term unemployed rises by at least 300,000.  It remained 150,000 or more above its bottom in the month that the economy entered the recession.

This is tough to show graphically, but here it is from the 1960s through the early 1990s: 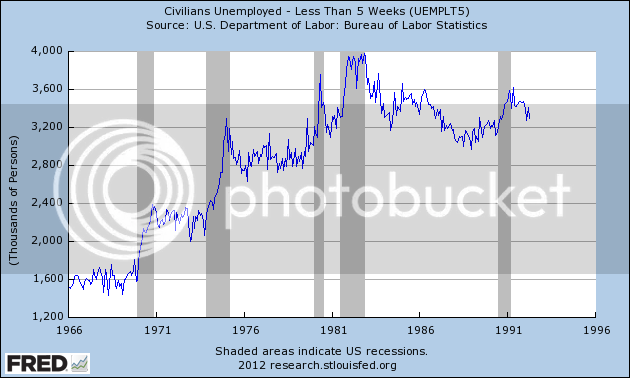 Until last year, the maximum increase in the short term unemployed prior to a recession was 500,000.  Now let's look at this same relationship since the late 1990s: 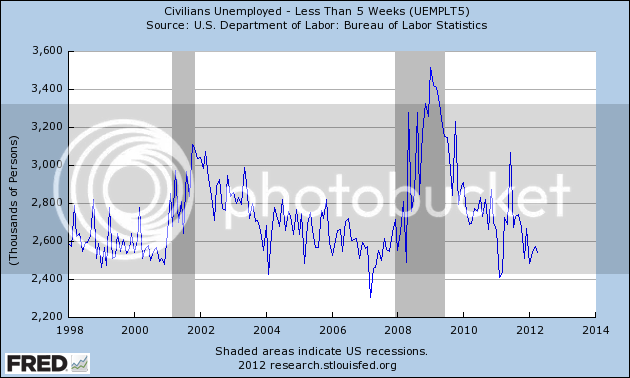 The relationship continues.  But note what happened last year.  Between March and June the number of short term unemployed increased by over 600,000 -- and it remained above 300,000 through September.

As I've pointed out a number of times, the long leading indicators for the economy did hit a particularly weak spot between late 2010 and early 2011.  The short leading indicators plummeted between May and September.  It's no wonder, seeing this spike in short term unemployment, that ECRI believed the US may have already entered recession, or if not, it was "imminent" last September.

There's no doubt that the general trend since then has been down.  On the other hand, we have not established a new low, and this year's numbers have been about 100,000 to 137,000 above the April 2011 low.  Unless and until we establish a new low,  this signal is not giving us an "all clear."
Posted by New Deal democrat at 2:00:00 PM