Professor Taylor is Wrong In His Analysis (Again)

Professor John Taylor of the Economics One Blog is currently arguing that policy uncertainty and increased regulation are holding back the economic recovery.  Again, these points are wrong for the following reasons.

First, Professor Taylor uses this chart which indicates there are more regulators over the last few years, hence making it harder for businesses to move forward. 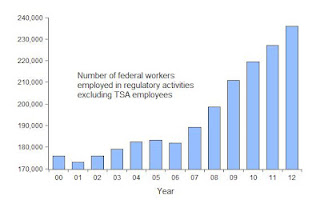 First, the chart assumes that all people involved with the agencies are in fact people directly involved with regulation.  Or, put, another way, that none of the people hired include support staff etc..

Second, we see a sum total increase of about 60,000.  Considering the size of the US population and the size of its business community, this seems like a stretch as well.

Third, Professor Taylor's argument assumes that the previous level of regulator activity was adequate or too high -- that the US was over-regulated before the increase.  I would strongly argue the counter-factual -- that the US was in fact under-regulated.  In support of that, I would suggest Professor Taylor read Bailout Nation of Barry Ritholtz, or the numerous postings on his blog detailing the under-funded nature of the SEC.  In my own experience as a tax attorney, I can tell you the IRS' enforcement division is seriously under-staffed in relation to the level of activity they are supposed to engage in, leading to a very large tax gap. Also note that vast under-regulation -- that is, allowing banks and the like to greatly distort the economy through poor lending standards etc.. -- is what got us into this mess. 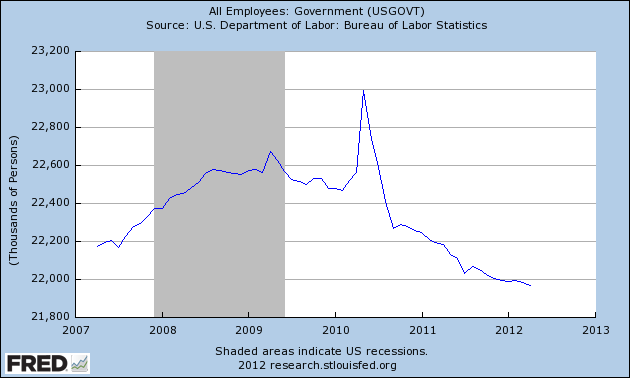 Notice that total government employees have dropped by over 600,000 over the last 5 years.  This represents a far larger negative impact in the form of decreased demand for the economy as a whole which greatly outweighs the "too many regulators" arguments.

Next, Professor Taylor argues that the following graph indicates there is policy uncertainty created by more expiring tax provisions: 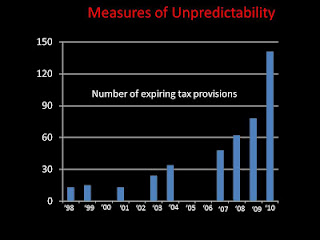 Simply put, the vast majority of tax code (as in over 95%) is remarkably stable; what was a deduction last year is still a deduction this year.  Changes occur at the margin.  And to argue that a possible increase in tax rates is freezing activity assumes that rates are at crucial levels.  In fact, the US' overall tax rate is near 60 year lows, meaning we are hardly overtaxed.  This means an increase in rates will only effect activity at the margins.

In addition, the most likely argument put forward in support of this proposition is that the possible increase tax rates from the expiration of the Bush tax cuts is freezing activity.  However, it rates are going up, activity should be pulled forward into this year, not held back into next.

Finally, look at the vast number of tax code provisions that will change: 150.  And that assumes these are major provisions, which most are not.

In short,  Professor Taylor's arguments are easily dismissed.
Posted by Unknown at 9:30:00 AM