ECRI's recession call has justifiably gotten much coverage. On the other hand, many have noted the lack of transparency of their method, making reliance on them a matter of trust rather than testing. An alternative to their approach is based on the research of UCLA Anderson School Prof. Edward Leamer. Prof. Leamer made an excellent presentation[pdf] about the progression of business cycles at Jackson Hole in 2007. It is research I have relied on many times, including being able to see the beginning of the Great Recession ahead of time.

Here's the essence of his conclusion:

"The temporal ordering of the spending weakness is: residential investment, consumer durables, consumer nondurables and consumer services before the recession, and then, once the recession officially commences, business spending on the short-lived assets, equipment and software, and, last, business spending on the long-lived assets, offices and factories. The ordering of the recovery is exactly the same."

Leamer made use of a mathematical kernal to calculate the relative contribution of housing and the other components to GDP during expansions and recessions, but the raw numbers are persuasive on their own accord. Here are housing permits (blue), vehicle sales (red),since 1974 and non-vehicle real retail sales (green) since that series began in the 1990s (normed to 100 as of December 2007):. 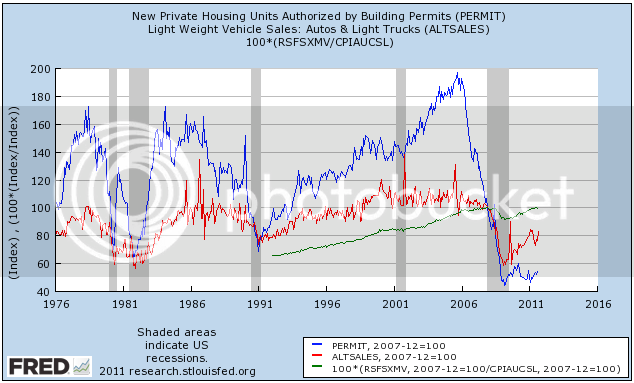 Now here is a close-up of those series since December 2008, normed to their post-recession highs: 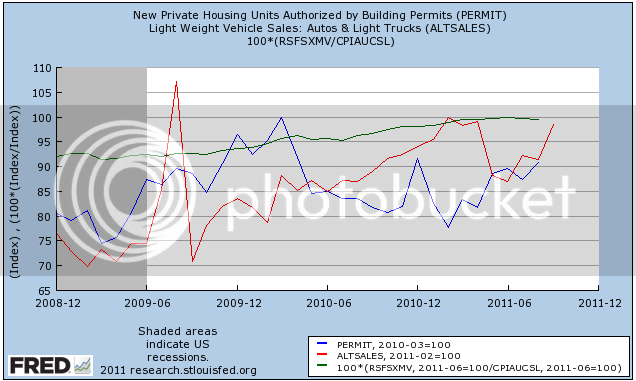 The order of the decline from post-recession highs certainly fits Leamer's research, but the amplitude (compare the top graph) is almost trivial.

In the past, housing permits have had to fall 200,000 or more from their high before a recession was triggered. From post recession high (688,000) to trough (534,000) was 154,000 -- enough for a significant knock on growth, but not sufficient alone based on past episodes to actually trigger a downturn. The post-tsunami downturn in auto sales this year was 1.7M, from 13.2M to 11.5M annualized -- or just barely consistent with a recession in the past.

Indeed, the September 2011 Anderson School forecast is for a stall rather than a recession:

is "far worse" than it was just three months ago. Considering the weak, revised data for the first half of the year, the forecast calls for average Gross Domestic Product growth of just 0.9% on average for the next five quarters and ending in the first quarter of 2012. However, the Forecast economists remain steadfast in their assertion that the United States is not currently in a recession, nor is there a recession in the forecast through 2013.
....
"Simply put, the three sectors that would normally put the economy into recession are already depressed; housing, consumer durables and inventories,".... If we are to have a new recession it would have to come from a collapse in exports, a generalized decline in consumer spending with a resultant decline in business investment. All plausible, but we are not forecasting that eventuality."

Based on the above data, I would go slightly further. Both housing and vehicle sales now appear to have rebounded and are in an uptrend. That's why last week I said that Monday's auto sales data would be so important. It is simply hard to imagine anything worse than the just-barely-a recession 2001 downturn being consistent with this leading data.
Posted by New Deal democrat at 10:30:00 AM