Hope on the Food Inflation Front?

One of my primary areas of concern has been food prices -- more specifically, grains, which form the backbone of our food system.  For example, corn is converted into many products which wind their way into prices (corn syrup, etc...) and it's also used as a feed for cattle.  Wheat and corn are considered substitutes in the feed area as well.  And food prices have been rising and are currently at uncomfortable levels as shown in this chart: 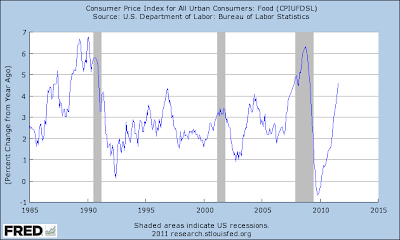 However, it appears that could be changing, thanks to the recent rout in commodities. 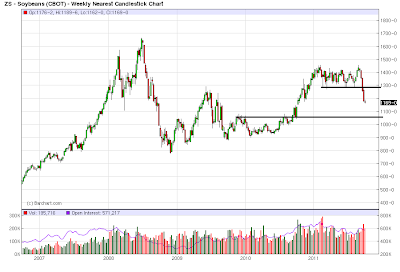 This 5-year chart of soybeans is the most hopeful.  Prices have been trading in a fairly tight consolidation pattern for the year, between 1300 and roughly 1425.  However, two weeks ago prices broke through support around the 1300 area and last week prices continued their sell-off.  Now, it's important to note that soybeans are still at very high levels.  But, it's encouraging from a price perspective to finally see them move through support. 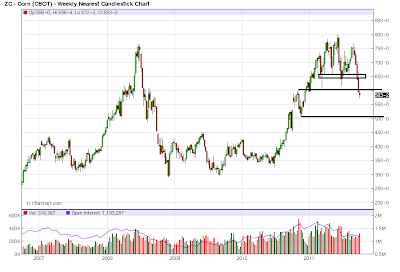 The chart for corn is also encouraging.  After topping at 5-year highs, prices have now moved through several areas of crucial technical support.  There is also plenty of room below prices to continue the downward move.  Like soybeans, prices are still at high levels.  However, they are now moving lower. 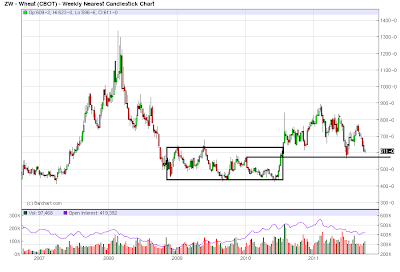 In short, it looks as though the commodity sell-off will help us with one very important area: food prices.
Posted by Unknown at 8:30:00 AM