Consumer behavior has both reflected and contributed to the slow pace of recovery. Households have been very cautious in their spending decisions, as declines in house prices and in the values of financial assets have reduced household wealth, and many families continue to struggle with high debt burdens or reduced access to credit. Probably the most significant factor depressing consumer confidence, however, has been the poor performance of the job market. Over the summer, private payrolls rose by only about 100,000 jobs per month on average--half of the rate posted earlier in the year.1 Meanwhile, state and local governments have continued to shed jobs, as they have been doing for more than two years. With these weak gains in employment, the unemployment rate has held close to 9 percent since early this year. Moreover, recent indicators, including new claims for unemployment insurance and surveys of hiring plans, point to the likelihood of more sluggish job growth in the period ahead.

Looking at the latest Flow of Funds report, we see that real estate wealth dropped from $18.251 trillion in 1Q11 to $18.160 trillion, or a drop of .5%.  In addition, over the same period, financial assets decreased from $49.544 trillion to  $49.411 trillion, or a drop of .26%,  And that number does not take into account the tremendous drop over the last few months in the stock markets -- along with the increased uncertainty created by the debt debacle.

The pace of household debt acquisition has also been slowing over the last few years, but the financial obligations ratio has also been dropping.

It's interesting that Bernanke singles out government employees in his testimony.  Here is the chart he's referring to: 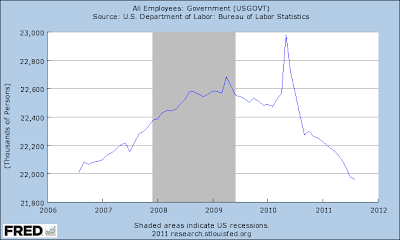 Stripping out the census bump, we see that total government jobs have been steadily decreasing to the tune of 600,000.  That's a tremendous drag on employment growth -- and is probably a reason why initial claims for unemployment have remained stubbornly high.

And then there is the unemployment rate: 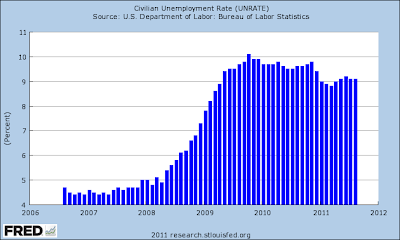 It has dipped below 9% for a few months, but has remained above that level for several years.  All this adds up to an extremely depressed consumer: 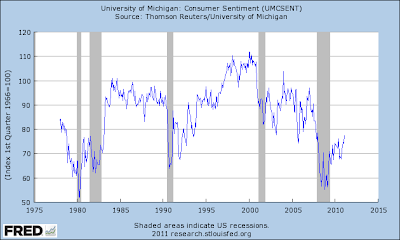 Note that readings are incredible low, especially considering the economy has been out of recession for a few years.

In short, the consumer has plenty of reasons to be depressed right now.