Why Aren't We Creating More Jobs?

This has been a central question for the last year+ -- why aren't we creating any more jobs?  I think the answer is really that there are multiple reasons.

Let's start with the most glaring: lack of demand.   Consider the following two charts: 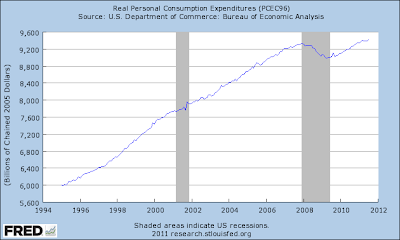 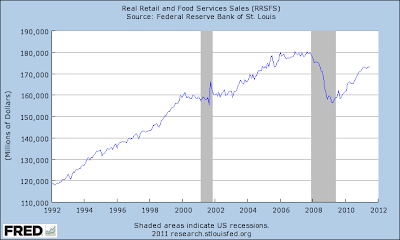 Real PCEs dropped hard during the recession and have only recently gotten above pre-recession levels.  Real retail sales are still below pre-recession highs, so there is still ground to make up.  In short, while the consumer is spending, they are still doing so at weak levels. 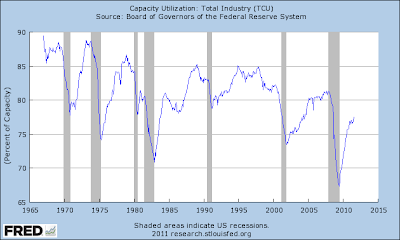 Capacity utilization crashed to its lowest level in 40 years during the recession and is still at weak levels.  This means there is still idle capacity that can be brought on line to satisfy an increase in demand at the expense of hiring additional employees.

Economic uncertainly is a big issue as well.  When you talk with CFOs etc.. sometimes they will use the word "visibility," as in, "we lack economic visibility right now."  This phrase simply means they can't say with confidence what will happen in the next 6-12 months.  Now, while no one can say with certainly what will happen at any time, there are times when you can say, "things stand a better chance of being better in 6-12 months" with a higher degree of certainty than others.  Now is not a time when there is any visibility as to what will happen.  Congress is a mess, growth is already slow, the EU situation is terrible, consumer confidence is low.. you get the ideal.  At times like this, no one can make a reasonable guess as to what will happen in the near term.  As such, this is not a good time to be adding new employees.


Third, most critical attention concerns new laws such as the Affordable Care Act or Dodd-Frank. But potentially more important is the way in which existing rules are interpreted, enforced and litigated. Here are a few examples. The Interior Department has canceled offshore leases that Exxon claims may yield billions of barrels of oil. Exxon is suing, claiming that Interior deviated from longstanding practice which was to extend such leases as a matter of course. Immigration and Customs Enforcement since 2009 has been auditing employers and forcing them to fire workers they can’t prove are legal. This represents a shift from its traditional approach of deporting workers but leaving firms alone. The Food and Drug Administration has become stricter and more capricious about approving medical devices. Michael Mandel highlights the trend with a terrific case study  here. Finally, there’s the practice by Fannie Mae and Freddie Mac to force banks to take back mortgages they originated during the boom and which have since gone bad. Fannie and Freddie have always had the right to do this but have only exercised it since the bust, I am told. There is merit to the government’s position in each case but surely the effect of each is, on balance, to deter investment, hiring and lending. By how much, I don’t know.

The above passage highlights the fact that there appears to be a regulatory tightening going on right now.  Put another way, the government is taking a more active role in enforcing certain laws and statutes.  From personal experience (in my business practice) I can tell you the IRS is certainly being far more aggressive in dealing with tax issues.  While a reader can correctly say, "it appears they are simply enforcing laws that are already on the books -- isn't that what they were supposed to be doing?" that misses the point.  The prevailing environment has been one of non-enforcement, so a movement to enforcement changes the dynamic in a big way.

All of the above factors -- weak demand, low utilization, economic uncertainty, different enforcement environment -- add up to a very challenging environment for companies.  Throw in still strong productivity gains and you get a potent environment in which hiring the last thing on the minds of most businesses.
Posted by Unknown at 8:30:00 AM