Another component of the Weekly Indicators, besides money supply which I discussed yesterday, is the Mortgage Bankers' Association's report on purchase mortgage applications. This gives us a high frequency read on housing sales. I've been reporting this in terms of week over week and YoY %age moves.

In the last few weeks, I've been very concerned that it had turned down again, coming in not just lower week over week (to the tune of over 10% in just two weeks) but also turning negative YoY again on the order of more than -5%. On further thought, however, I think I've been a little too pessimistic because I haven't taken into account the absolute level of such applications.

To show you why, here's a five year graph of purchase mortgage applications from Mortgage News Daily: 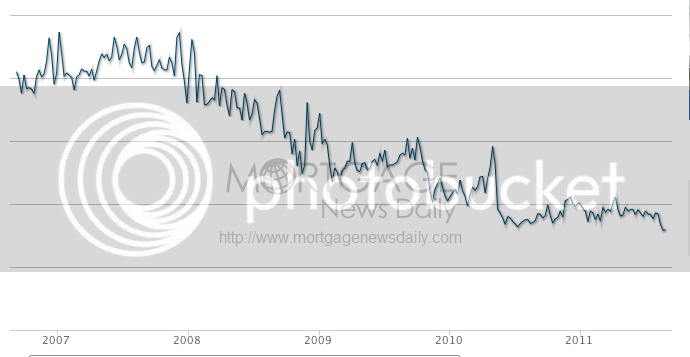 In other words, a 10% decline now, for example, is only equivalent to a 3.3% decline when the index was at its peak. This in the graph above, the 5%+ YoY decline of the last month really does not violate the essential flatness in applications for the last 16 months. Put another way, while the decline is certainly not good, it doesn't seem to warrant quite the pessimism it has contributed to my outlook in the last few weeks. But I'd still like purchase applications - and monthly car sales, that other big consumer durable - to recover to their springtime level to be less concerned about the trend in the economy.
Posted by New Deal democrat at 11:30:00 AM