Thoughts on the Employment Situation, Part I

After last week's dismal employment report, I though a macro level view of the employment situation would be in order.  So, let's see what the data says. 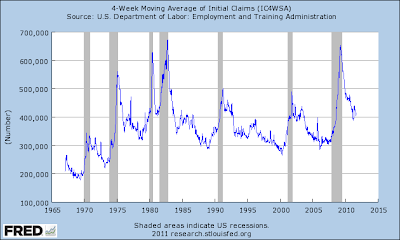 Weekly initial unemployment claims are still hovering around the 400,000 mark -- where they have regrettably been for the better part of the last year.  However, we haven't seen a large spike in this number, telling us we're not seeing a massive amount of firing -- or, more specifically, the level of firing associated with the start of a recession.  Instead, businesses are letting go of employees at a pace that is slightly more than average. 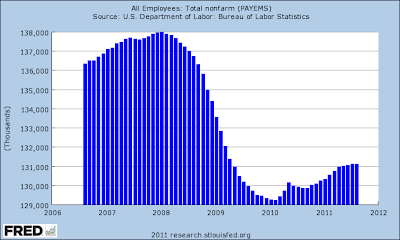 The above chart shows total nonfarm employment.  The chart tells shows massive job cuts during the recession.  But most importantly, it shows that, while there has been some job growth, it has been nowhere near enough to pick up the slack of the job losses from the recession.  It's also as though employers simply cut off 7%-10% of the economy and left it hanging. 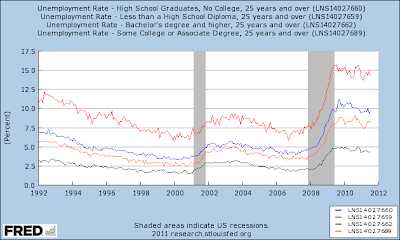 For me, the above chart is the most telling.  The lower a person's educational achievement, the higher their unemployment rate.  Going back to the previous chart, it looks as though employers cut a lot of jobs where educational achievement wasn't required.  Assuming that to be true, it also means the economy has a very large problem: bringing back those jobs probably isn't going to happen quickly -- if at all.

The central problem is simple: while there is still a slight bleed in the form of job losses, there is little gain to offset those losses.
Posted by Unknown at 3:00:00 PM