Despite all of the bad news lately (and there has been a ton of it), there have been two bright spots -- personal consumption expenditures and the latest ISM services number. PCEs comprise 70% of GDP growth, so they are an important data series.  Consider the following charts: 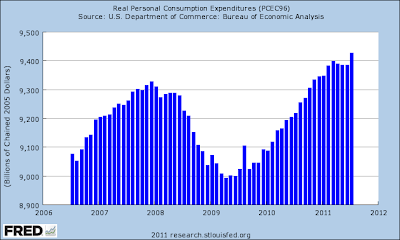 After stalling for the last four months (for the entire second quarter), real PCEs popped higher last month by .5%. 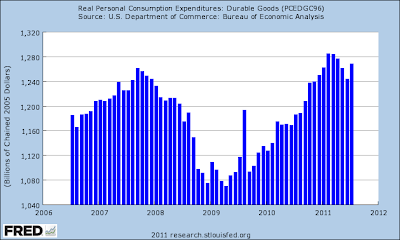 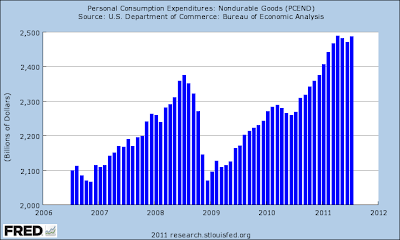 But non-durable goods are still mired in a tight range. 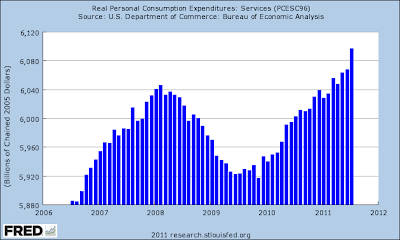 Services, however, saw a nice bump as well.  Considering these comprise about 65% of PCEs, this is an important increase.

PCEs in the second quarter were stagnant -- as evidenced by the near level position they were in for the last four months.  However, at the beginning of the third quarter, there is a good bump.  Given the overall weakness we've seen in the other numbers (especially employment) this data series is in danger of being seriously weakened going forward -- that is, another round of stagnation much like the second quarter is a more than slight possibility.  But at least the third quarter GDP number has a nice jump coming out of the gate.

The report also showed a majority of industries expanding verses contracting (10 were expanding;  were contracting).

There are plenty of reasons to be concerned right now: manufacturing is contracting, employment is in poor shape and Congress is a mess.  However, the two data points above represent wide swaths of the economy and their positive readings indicate all hope is not lost.