Morning Market Round Up

Yesterday, the euro -- which was already below the 200 day EMA -- broke below technical support in high volume.  The primary reason for this move the the ECB kepts rates at 1.5%, but Trichet issued a cautionary description of the EU situation, leading investors to sell the euro.  The EMA picture is still jumbled, as they are in a very tight range, but the gap lower a few days ago combined with the fundamental events makes this a very important move.  Ideally, we'd like to see the security rally into previous support to retest those levels and then move lower to make sure this is a shorting situation.

In contrast, the dollar is the clear beneficiary of the euros move lower, as evidenced by the UUP gapping higher on big volume.  However, this security is still below the resistance areas established in late May. 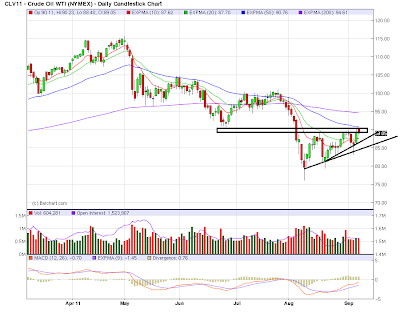 Oil is in a clear downtrend.  It fluctuated around the 200 day EMA for three months while the EMAs slowly drifted lower.  Prices dropped hard at the beginning of August, but have since formed a rising triangle pattern with resistance right around 90.  While the MACD is rising, it is still negative, taking away from some of the overall bullishness of recent price actions.  Also note the 200 day EMA is now in a downtrend and the shorter EMAs are below the 200 day EMA.  Even if prices move through the 90 price level they still have to contend with the 200 day EMA as upper resistance.  Also remember, that should the dollar rally in reaction to the euro's drop, commodities will probably take a negative hit.
Posted by Unknown at 6:43:00 AM