With consumer confidence plummeting, several bloggers have pointed out that such a plunge usually coincides with a recession. That's true, but the latest plunge can be traced directly back to the shameful display in Washington during the debt ceiling debate much moreso than direct economic data. S&P was far from alone in concluding that the outcome demonstrated and entrenched the empowerment of a veto-wielding minority of economic lunatics.

But consumer confidence is only one metric that signals an oncoming contraction. Simply put, you must watch consumer deeds at least as much their stated intentions.

[W]hen energy prices go up, consumer spending falls. But there are two surprising things about the quantitative character of this response. The first surprise is the delay-- energy prices go up at time t, but the biggest consequences for consumption spending aren't seen until [ ] 12 months later. The second surprising feature of these results is the magnitude. If consumers continued to purchase the same number of gallons of gasoline as they had before, a shock of the size analyzed in this graph would require them to reduce spending on other items by 1%. Yet eventually they historically would be predicted to reduce spending by 2.2%. ... [C]onsumers cut spending by [ ] much more than the shock itself."

Several years ago I wrote about how critical the severe consumer spending retrenchment was, in the wake of the 1929 stock market crash, in 1930. There I documented how:

What made matters worse was a big drop in U.S. consumer spending—far more than can be explained by the stock market crash. The drop may have been a backlash to the rise of installment lending (for cars, furniture, and appliances) in the twenties. The prevailing practice allowed lenders to repossess an item if the borrower missed just one payment. People may have stopped making new purchases to reduce the risk of losing things they already had bought on credit. Whatever happened, the slump soon fed on itself. Weak spending depressed prices, which meant that many farmers, businesses, and nations couldn't repay their debts. Rising bad debts prompted banks to restrict new loans and sell financial assets, usually bonds. Scarce credit led to less borrowing, less spending, lower prices, and more bankruptcies.

A similar dynamic played out in September 2008. In response to a daily diet of cataclysm, consumers simply froze.

The bottom line is, it is the reaction - even over-reaction to events - by consumers in their spending that proclaims the downturn. And so far, that hasn't happened.

Let's start with the graph of consumer confidence as measured by the University of Michigan, showing its cliff-dive in the last two months (h/t Briefing.com:

The sentiment bar (gold) is one of the 10 LEI, and will have a significant negative impact of the July report, along with the negative stock market.

But now let's pair that with consumer spending as measured by real retail sales (Note: since July inflation hasn't been reported, retail sales data (red) ends with June. By agreement with the U. of Michigan, the Fred graph only shows consumer confidence (blue) through last December): 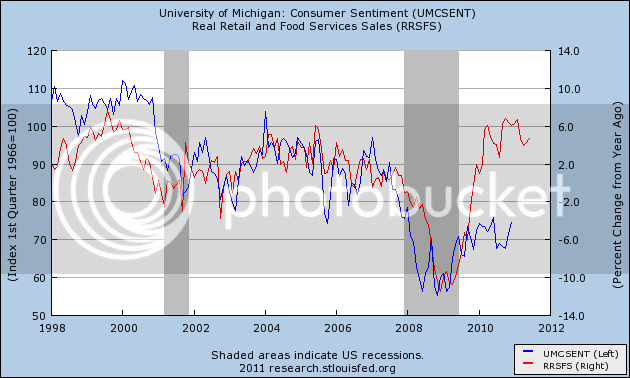 Even more up-to-date graphs can be found at Gallup. First of all, here is their poll of consumer sentiment through Friday August 11, showing the same precipitous decline as in the U. of Michigan data:

But now here is the consumer spending data from the very same Gallup poll:

Notice that consumer spending is at its highest peak in over a year. Only last Christmas was higher, and this August is significantly ahead of last August. (As an interesting aside, Gallup consumer spending was cited once by the Pied Piper of Doom: heralding that "consumer spending [has] collapsed" on January 16, 2011. This was smack in the middle of the three worst days period of the last 2 years. Yes, he unintentionally bottom-ticked it! For some reason he hasn't mentioned it since ....)

In short, if consumers feel no confidence in their government to do the right thing for the economy, it isn't showing up in their wallets yet. Unless and until it shows up in their wallets, it is unlikely that a contraction has started.
Posted by New Deal democrat at 10:18:00 AM