S and P Got it Right

The reaction to the S and P downgrade has been rather hysterical to watch. The Democrats are focusing on the statement regarding the lack of inclusion of new revenues and the inability to actually raise revenues as a reason for the downgrade, while the Republicans are focusing on the statement regarding entitlements. However, this tit for tat mentality exemplifies one of the central problems S and P is warning about.

The political brinksmanship of recent months highlights what we see as America’s governance and policymaking becoming less stable, less effective, and less predictable than what we previously believed. The statutory debt ceiling and the threat of default have become political bargaining chips in the debate over fiscal policy. Despite this year’s wide-ranging debate, in our view, the differences between political parties have proven to be extraordinarily difficult to bridge, and, as we see it, the resulting agreement fell well short of the comprehensive fiscal consolidation program that some proponents had envisaged until quite recently. Republicans and Democrats have only been able to agree to relatively modest savings on discretionary spending while delegating to the Select Committee decisions on more comprehensive measures. It appears that for now, new revenues have dropped down on the menu of policy options. In addition, the plan envisions only minor policy changes on Medicare and little change in other entitlements, the containment of which we and most other independent observers regard as key to long-term fiscal sustainability.

The fact the debt debate went as hot as it it for as long as it did (over a month and a half) -- especially when it should have been a simple, up or down extend the limit vote -- tells volumes about where we are as a country. We are still the largest economy on the planet. The US Treasury market is the benchmark on which a vast majority of finance is based. The fact the US provides a "riskless" asset (Treasury bonds) to the financial world is built into a large number of basic financial models. And yet, we were pushed to the brink of not having a deal. The level of irresponsibility inherent in that statement speaks volumes about the complete and total lack of political will to actually solve problems rather than engage in the endless, 24-hour news cycle need for spin.

Investors largely tuned out the debt-ceiling debate until its final days out of a belief based on long experience that for all the antics and rhetoric of the Tea Party, the people who actually run Capitol Hill would never compromise the country’s credit worthiness. After all, it was Mr Boehner who reminded his freshmen colleagues that on the debt ceiling they’d have to act like “adults.”

That is not what happened. As the fight dragged on, the leadership moved closer to the Tea Party, not the other way around. And they seem happy with the results. Why else would Mitch McConnell have promised on August 1st to do exactly the same the next time the debt ceiling must be raised?

It is striking that the proponents of this strategy seem so oblivious to its impact. Our economy is lubricated by a sophisticated and stable credit market whose most vital component is also the most ephemeral: trust. As the crisis amply demonstrated, when trust erodes, the system freezes up. America has built a reputation for responsible and credible management of its finances over the centuries, and that reputation has been reduced to a political football, like a federal judgeship. Henceforth a foreign pension fund or central bank that once mindlessly ploughed his spare cash into Treasurys will have to think twice.

The sheer stupidity of these people -- the downright ignorance (for which I'm sure they will express profound pride rather than any amount of shame) is breathtaking.

Back to the S and P release

It appears that for now, new revenues have dropped down on the menu of policy options.

The lack of inclusion of any revenues in the deal is utterly mind-numbing. Here is a chart of federal expenditures and receipts as a percent of GDP from Invictus over at the Big Picture. 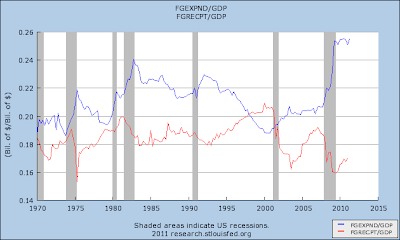 Notice the incredibly wide chasm between taxes and expenditures. Logic (that pesky thing where we use our brains to actually solve problems) would indicate we should meet in the middle. However, that is not what happened because one party has no clue how to negotiate and another party believes in taking hostages to get its way irregardless of the cost. This also speaks to point number one as well.

In short -- despite the name calling and finger pointing at S&P (which they deserve for many reasons unrelated to the above points) they actually called this one correctly: considering the gap between spending and revenues we need to raise taxes but the dysfunction of our political system makes that an impossibility. And that dysfunction is itself a major problem.