The next key level of support is 90/bbl. Should prices move lower, we'll have to go back on the chart to fine support and resistance.

The market has done just that -- moved lower. So let's take a look at the 1-year chart to see where support and resistance are: 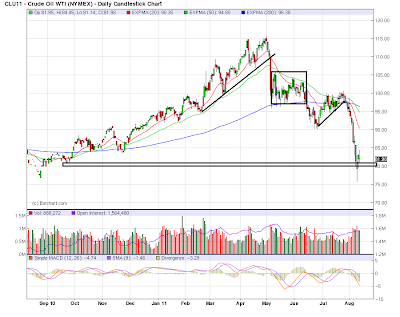 On the 1-year chart, we see that prices were this low nearly 1-year ago. 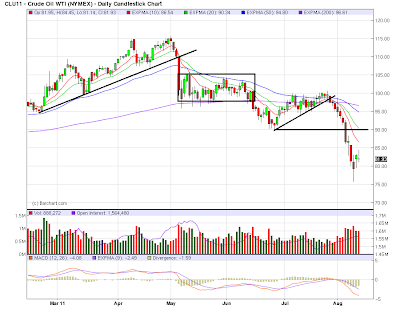 The 6-month chart shows the latest downward move in more detail. After moving higher, prices first dropped lower at the beginning of May when them moved down sharply and found support near the 200 day EMA. Prices next moved sideways using the 200 day EMA as technical support, but then moved lower again in mid-June. Prices dropped then rallied again until mid-July when they just barely got through the EMAs. Now prices have dropped lower again, this time very sharply. Also note the shorter EMAs are all now moving lower and have moved through the 200 day EMA. Momentum is clearly negative as well. 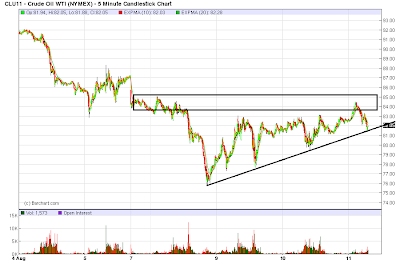 On the 5-day chart, we see a rising wedge pattern; prices are moving higher but have hit upside resistance in the 85/85 price area.

The oil market is now near a 1-year low, indicating the fears of a slowing economy and the commensurate drop in demand are driving trading decisions. While the long-term supply/demand imbalance is still very bullish (which I have thought would dominate trading decisions over the last month and a half or so), the short term trading environment is clearly bearish. Right now prices are looking for a bottom on which to create a base.