Pricing a Collapse That Isn't There

Recent market events have become a bit of a self-fulfilling prophecy: as the market drops, people panic and start to sell not because of fundamental reasons but because everybody else is. The mob takes over, forcing a mass liquidation. However, the economic fundamentals point to a weak economy with growth hovering around 0 rather than an imminent collapse. Let's look at the data.

Let's start with the basics - the Leading Economic Indicators:

The Conference Board Leading Economic Index® (LEI) for the U.S. increased 0.3 percent in June to 115.3 (2004 = 100), following a 0.8 percent increase in May, and a 0.3 percent decline in April. The largest positive contributions came from money supply, the interest rate spread, and building permits.

Rates are now incredibly cheap and the money supply is expanding. In short, there is money to lend at very cheap rates.

Second, it's hard to imagine a collapse without a massive drop in real estate. However, the housing market is already in a multi-decade low, meaning a collapse is not in the cards. 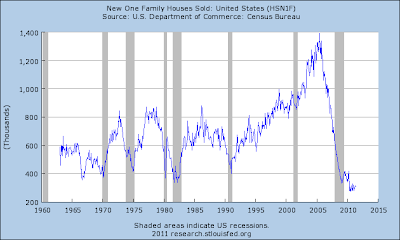 The above chart of new housing sales shows a pace of activity which is near the lowest on record; it really can't get much lower. 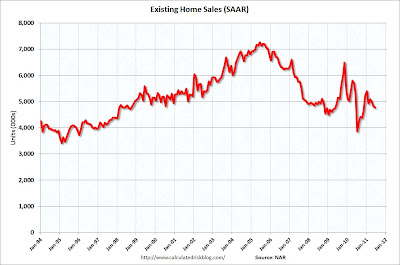 The existing home sales market has been fluctuating around the 5 million homes/year mark for a little over two years (this is when you count the spike and contraction associated with the new housing credit). While this chart could drop to the 4 million/year level, it's hard to see that drop when interest rates are dropping like a stone.

The housing market has been bumping along the bottom for the better part of two years now. It's hard to see how it could get worse, especially in such a low rate environment which is bound to spur at least some demand. 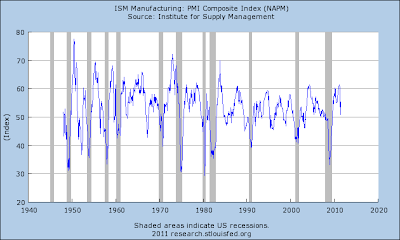 Manufacturing has taken a hit over the last few months. Some of this is the result of slowing demand and some of this is a natural drop from high levels. However, despite a continued effort to put on the brakes, Asia is still growing smartly. Cheaper oil will lower shipping costs, making US production that much more attractive. The supply chain disruptions caused by the Japanese earthquake are now being solved. It's difficult to see this area of the economy dipping much beyond a shallow contraction for a few months at this point. 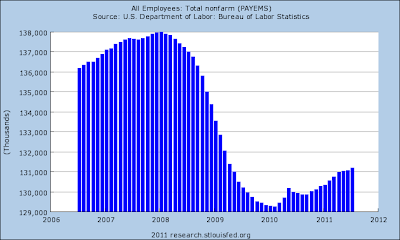 Total nonfarm payrolls printed a massive collapse during the last recession. However, this leads to a somewhat morose counter-factual: how much more employment fat could be cut from US payrolls at this point? While it's always possible we could start to see massive lay-offs again, the above chart tells me that US businesses are already staffed to the bone and have very little more to cut while still keeping the doors open. 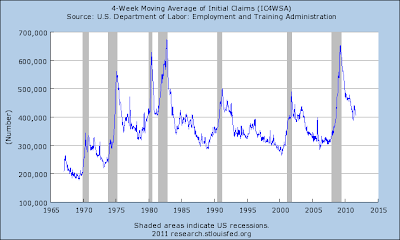 The 4-week moving average of initial unemployment claims is hovering around 400,000, which does not show a massive spike to imply we're about to see a jump in unemployment. While the indicator has been at the aggravating 400,000 level for most of this year, we haven't seen a big spike up to imply a massive increase in unemployment.

In addition, consider these observations from Capital Observer:

The bottom line is while the underlying data is weak, it's not crashing and shows no signs of collapse, massive stress or even turning over in a significant way. The numbers are showing an economy fluctuating right around 0% growth, with a slight positive bias. But, again, I think the markets are pricing in a recession or collapse that just isn't in the data right now.