The Conference Board Leading Economic Index® (LEI) for the U.S. increased 0.8 percent in May to 114.7 (2004 = 100), following a 0.4 percent decline in April, and a 0.7 percent increase in March. The largest contributions came from the interest rate spread, consumer expectations, and housing permits.

Says Ataman Ozyildirim, economist at The Conference Board: “The U.S. LEI rebounded in May and resumed its upward trend with a majority of the components supporting this gain. The Coincident Economic Index, a monthly measure of current economic conditions, continued to increase slowly but steadily. Overall, despite short-term volatility, the composite indexes still point to expanding economic activity in the coming months.”

Says Ken Goldstein, economist at The Conference Board: “Modest economic growth is being buffeted by some strong headwinds, including high gas and food prices and a soft housing market. The economy will likely continue to grow through the summer and fall, however it will be choppy.”

Let's look at the details: 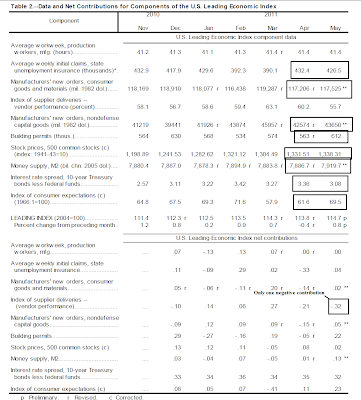 In the above chart, notice the majority of indicators were up and only one contributed negatively to the report. Despite the bearish news of the last few weeks, this is a welcome upside surprise.