Harbingers of the midyear stall

With the midyear economic stall (that I told you in January was going to happen) well and truly in the forefront of recent data and punditry, I thought it would be worthwhile to look at what components are and are not driving it. These are the 7 harbingers of economic slowdown I wrote about as leading indicators for last year's event.

First of all, let's take a look atECRI's growth index:

This index hit an air pocket in April - May 2010. There has been a much more muted decline this year - which makes it all the more odd that ECRI has voiced much more concern about a "global slowdown" this year than it did last year. Incidentally, this is also why I follow the totally transparent LEI more closely than this index.

A downturn or implosion in China is sometimes referenced as a reason why we are on the verge of a double-dip. Well, apparently somebody forgot to tell the Shanghai stock market: 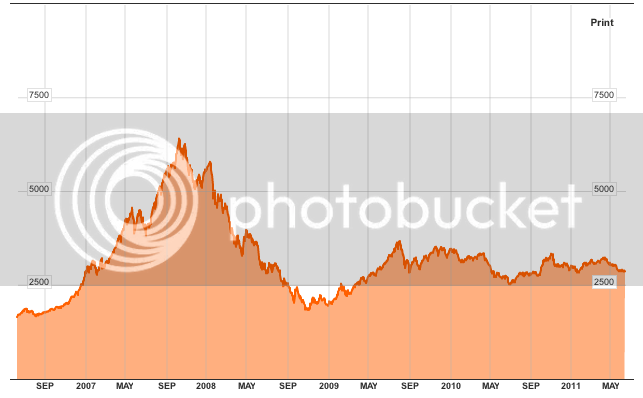 This market, rather than the NYSE, leads the world. The bursting of its bubble in 2007 heralded the "great recession," and it bottomed months before Wall Street. While the index hasn't made a new high in the last year, it also hasn't made a new low. That it is going sideways isn't good, but it doesn't portend an economic downturn at this point, either.

Another reference is renewed concern of a Eurozone crisis potentially infecting banks worldwide. But if that is the case, why is the TED spread, a measure of financial system fear, so quiet: 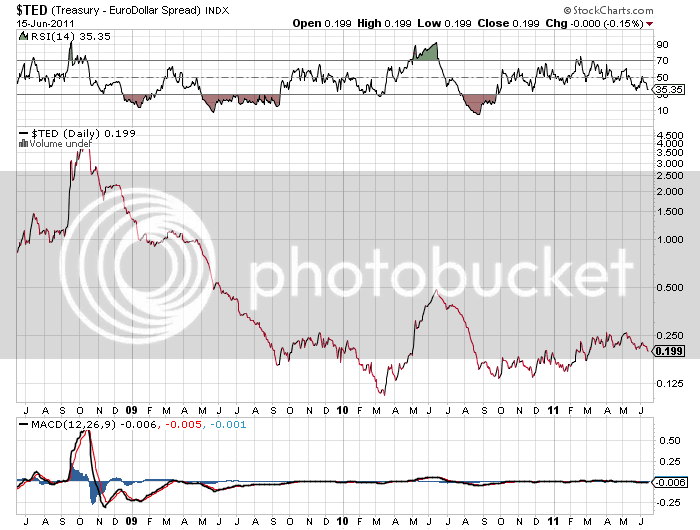 This index is off its comatose lows, but isn't even half as concerned as it was last year, let alone during the 2008 crisis.

Another source of hand-wringing is the housing market. But in terms of economic growth, new housing sales and permits are much more important than housing prices. One good and timely measure of the new home market is purchase mortgage applications:

(h/t Mortgage News Daily). Unlike last May, when the expiration of the $8000 housing credit created a steep downdraft, this index has generally trended sideways now for over a year. It's also worth mentioning that housing permits had one of their best months in two years in May, with over 600,000 being issued. If house sales aren't going down, where is the source for a big economic downturn?

Money supply is frequently thought of as a harbinger of the economy. At no point in the last 80 years, including the Great Depression, has there been an economic downturn without both Real M1 being negative, and Real M2 being less than +2.5%. Well, Real M1 is at about 10%, and while Real M2 is less than +2.5%, it is not as far below that mark as it was one year ago: 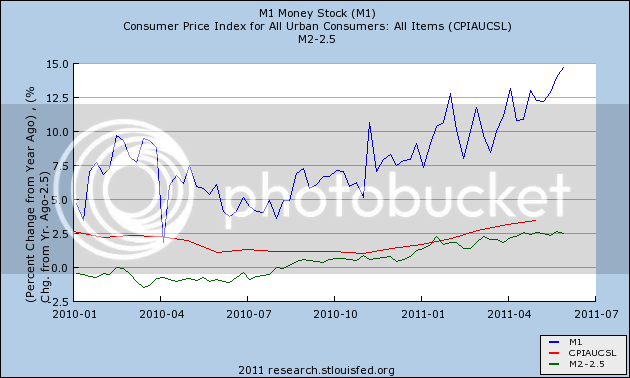 One big source of concern, exactly as in 2008 and one year ago, is that real wages are once again negative: 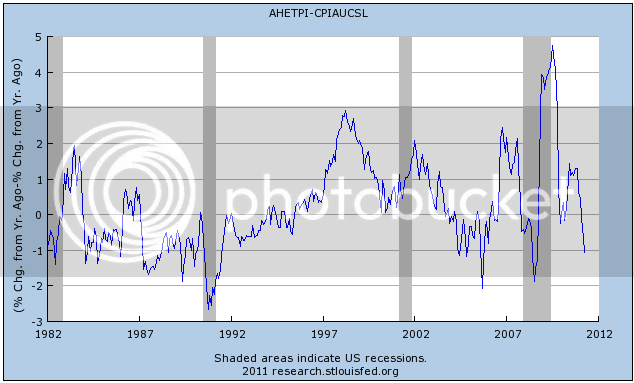 Without the ability to take on new debt, or to cash out appreciating assets, price increases hit ordinary American white and blue collar workers hard, and immediately impact spending.

On that score, Oil prices have exceeded the level of 4% of GDP noted by Oil analyst Steve Kopits as the point where Oil shocks turn the economy negative: 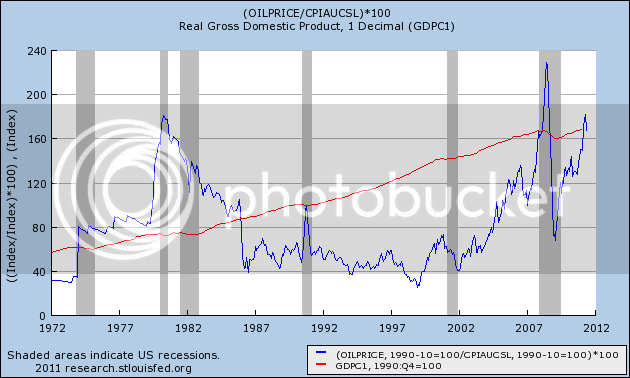 This stressor is worse than last year, where the price of Oil never breached the 4% limit.

Perhaps as a result of the wage and Oil pressures, bond yields and stock prices are moving in sync again: 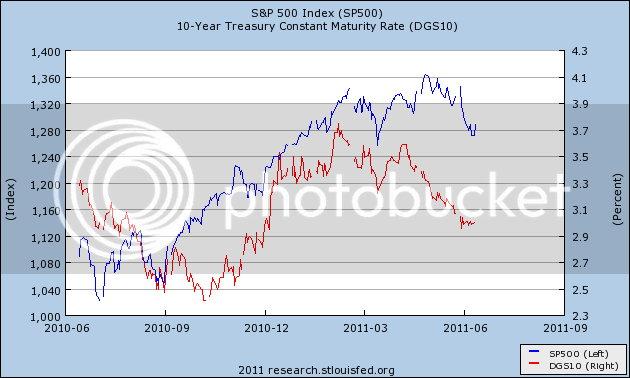 One item that is different this year is the impact of supply chain disruptions due to the earthquake in Japan. It has been speculated that the recent higher initial jobless claims were due to layoffs in factories dependent on this supply chain. That is said to be abating - but it is just in time for Washington's austerian stupidity to kick into high gear, forcing perhaps hundreds of thousands of state and municipal layoffs due to the expiration of federal aid to state budgets.

In summary, the driver of the current slowdown appears to be primarily high Oil price and low wage growth, with an assist from Japan's earthquake and contractionary policy emanating from Versailles.
Posted by New Deal democrat at 1:30:00 PM