Housing Tracker data: house prices may bottom by next winter

Several months ago, the Case-Shiller 10- and 20-city housing index began to make new Year-over-Year declines. Last week, Yale University economist Robert Shiller made headlines when he suggested that declines in housing prices might have a long way to go:

Robert Shiller, the economist who co- founded the S&P/Case-Shiller index of U.S. home prices, said a further decline in property values of 10 percent to 25 percent in the next five years “wouldn’t surprise me at all.”

“There’s no precedent for this statistically, so no way to predict,” Shiller said.

Although Shiller was actually quite cautious, emphasizing that prices might fall by such an amount, and that he could not actually make a prediction, that didn't stop many commentators from taking his words as a rock-solid prediction. Indeed, it is safe to say that the accepted wisdom is that we have begun a "housing double-dip" that has a long way to go, and may take the entire economy down into a double-dip recession.

Because of this renewed concern, I added the weekly changes in Housing Tracker's report of house prices to my "Weekly Indicators" column. In order to have a better historical reference set for reporting weekly changes in this data, I calculated the results since the beginning of 2011, and that yielded a stunning result. The Housing Tracker database of over one million real-time asking prices in 54 metropolitan areas, a database that accurately and in real time showed the peak in housing prices in 2006, strongly suggests that prices may be much closer to a bottom than any analyst's forecast, and in particular, that the bottom in housing prices could come as early as next winter.

By way of background, I first began making use of Housing Tracker data in early 2006. The first version tracked prices beginning in Spring 2005 in 40 metro areas. The current version was launched one year later, and both series were updated weekly together for several more years before the initial version was taken offline. Using that first version, I was able to show that, as of June 2006, prices in 16 of the 40 metro areas had peaked and had turned negative. By August, prices in 27 of 40 metro areas had turned. In other words, the data showed in real time that house prices had peaked in half of all metropolitan areas in mid-2006, shortly after the present version of Housing Tracker was launched.

Next, let me digress briefly and talk about housing inventory. Inventory is an important clue as to house prices. Bill McBride, a/k/a Calculated Risk, has suggested that the saturation point between increasing and decreasing housing prices comes at about the point of 6 months' inventory. Because Housing Tracker also reports weekly inventory data for each of the 54 metro areas every week, a good guess as to how much inventory is consistent with the turning point can be made. And as it happens, via Calculated Risk, economist Tom Lawler provided this crucial information several weeks ago. Here is Calculated Risk's graph of the Housing Tracker inventory data catalogued by Lawler: 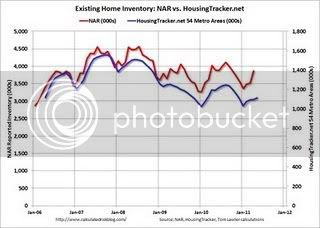 In fact, April 2011 listings were -1.7% less than April 2006, which was shortly before the tipping point for housing prices.

If the relationship between housing inventory and housing prices holds, than the declines in house prices should be slowing down, and we should at least be near the turning point where housing prices bottom, if not there already.

And that is exactly what the Housing Tracker asking price data in 2011 shows. Below is a chart of the unweighted average YoY% decline in House Prices for the entire 54 metro area database, from January through May 2011:

In other words, instead of renewed declines, as has been suggested by the Case-Shiller index, the Housing Tracker database shows that every single month, the YoY% decrease in asking prices has been abating. In fact, if the trend from the early part of this year continues (and if inventory continues to decline the direction if not the velocity probably will), YoY asking prices could turn positive by about next January.

This is, needless to say, a stunning result, in sharp contrast to the accepted wisdom of the moment. While I do not question the validity of the Case-Shiller method, the fact remains that the Housing Tracker database is something like 30% of all listed properties, reported in real time, with a proven track record at the top of the bubble. I will continue to report on the changes in this data as it is updated every week.

ADDENDUM: Each of the monthly 2011 entries in my chart above required 54 separate calculations, one for each metro area, and then averaging the result. While I was doing that, over the weekend Ben Engebreth, the proprietor of Housing Tracker, put the national averages for each month online - reducing 54 calculations to 1! This will make it easy to prepare YoY% change data all the way back to April 2006 - 2007. Once I do that, I'll post the result, and modify my conclusion as may be warranted.
Posted by New Deal democrat at 8:30:00 AM