Every now and then you can sum up part the economic situation in one picture, and the below graph imo does exactly that with regard to the impact of the US's economic stimulus packages. It is from Railfax, the service I cite every Friday for the previous week's rail traffic.

Recently Railfax added a new feature that allows you to see traffic over a specified time (and a few other goodies that I haven't quite figured out yet). The below graph is the entire last 10 years, broken up between baseline (blue), cyclical traffic that goes up or down with the economy (green), and intermodal containers (orange) which is an excellent proxy for imports: 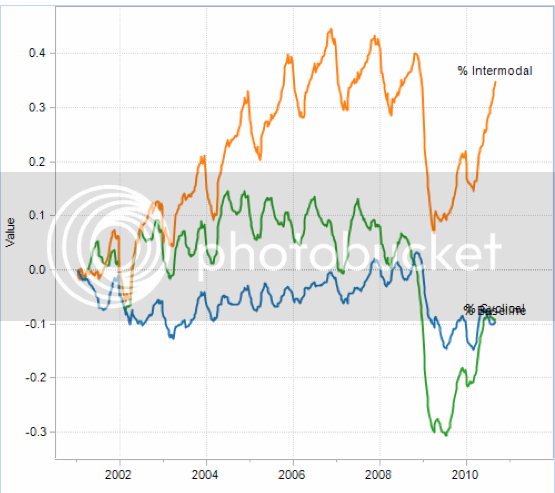 The first, obvious point is that rail traffic is seasonal, increasing through the delivery of goods for the holiday season, with a cliff-diving decline immediately after.

Secondly, notice how imports increased much more strongly than cyclical goods during the "Bush boom."

Finally, notice how after the collapse of the "Great Recession," cyclical goods traffic has only come partway back, while imports have surged, almost equalling their volume during the peak of the last economic expansion.

It appears clear that a fair amount of the US stimulus package "leaked" to goods suppliers in Asia. So we got some of the benefit of our stimulus, and in addition to their own stimulus package, China got the rest.

Imho the above graph shows exactly how the chronic trade deficit is the most pernicious structural economic difficulty facing this country.
Posted by New Deal democrat at 11:30:00 AM