This was the big news last week. The IEFs finally broke their 5 month uptrend. If this holds, it will be bullish for the stock market.

Notice that prices fell below the 10 and 20 day EMA, and now have the 50 day EMA or a retest of the trend line as targets.

Last week's move came in three waves. There was an opening gap on Wednesday, followed by a second leg down. Thursday morning there was a slight gap down with prices moving sideways for the rest of the day, and Friday saw an incredibly large gap lower with a quick rebound (but still a big loss) on the day.

The technical indicators are not giving as a strong confirmation of the trend break yet. First, the A/D line (a) is not moving lower but the CMF is approaching o (b), indicating some downward momentum in the trend. The MACD (c) has given a definite sell signal.

Last week we saw prices finally break through the 200 day EMA (a). We also have the shorter EMAs turning higher. However, we still have a long way to go before the EMAs become truly bullish. The A/D and CMF lines (c and d) are very interesting. According to the A/D line, we didn't see a massive exodus from the market -- that is, we didn't see any money leave the market; the same amount of dollars are still chasing the same amount of stocks. The CMF lines (d) indicates a bit of money left the market, but we did not see a mass exodus. The MACD has given a buy signal.

Notice the SPY prices are now back in a trading range. 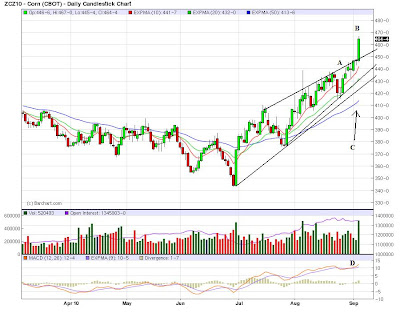 Corn prices have broken through upside resistance (A), printing a very strong bar (B). The EMAs are incredibly bullish with the shorter above the longer and all moving higher (C). Also note the MACD is moving higher as well (D). 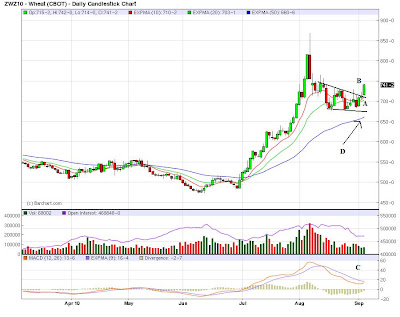 After consolidating (A), wheat prices are now moving higher (B). Also note the EMAs are now turning more bullish (D). The shorter EMAs -- which were moving sideways -- are now moving a bit higher. Finally, keep an eye on the MACD (C), as it might give a buy signal soon.
Posted by Unknown at 5:00:00 AM