Infrastructure Spending Is Not A Boondoggle

One of the biggest problems in talking about the importance of and the need for infrastructure spending is that people who argue against it almost never look at maps. Let's paint a hypothetical picture. There are two cities, A and B. Both cities have complementary economies -- that is, the economy of A provides goods and services that would increase the productivity of economy B and/or vice versa. Or, suppose we have the far more likely case where both economies complement various parts of the other. How are goods and services going too move between these two cities? The standard Libertarian answer to this question is to let private industry do it. However, in a country as large as the US that would require trillions of dollars -- an amount of money far out of reach of even the largest companies.

To draw this example into the real world, here is a map of Texas' (my home state) rail lines: 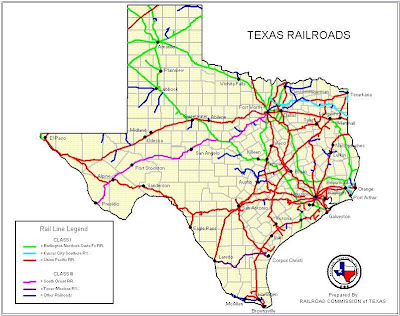 Texas is littered with small towns not directly on a rail line. How are they supposed to get goods delivered to them? The same situation obviously exists with every other state. Towns not along major rail lines need good roads to receive goods and services.

In addition, not all goods and services move by rail. For those that move by truck, it makes tremendous sense to make sure the roads are in good repair, which lowers transportation costs by lowering damage caused by poor roads. For example (and completely hypothetically), suppose a well-maintained road only causes 1 tire blow-out every week per 50 miles of road whereas a poorly maintained road causes 5 blow-outs per week. Each accident obviously increases the cost of maintaining that particular vehicle effected. But it also adds to other companies' transportation costs by increasing traffic which lengthens delivery times, increases gas consumption for vehicles caught in the traffic jam and adds to wear and tear on other vehicles stuck in traffic.

And that is just roads. There are plenty of other areas that need help. A 2008 Popular Mechanics article highlighted the following areas where the US could increase infrastructure investment: levees, electricity grid, US ports, and the lock system. For example, consider these statistics from that article:

One-quarter of the 599,893 bridges in the United States have structural problems or outdated designs. The country can do more than rebuild these bridges—we can make them better, using high-performance concrete, steel and composites; automated monitoring systems to watch for deterioration; and smarter designs. Similar technologies can also be employed on highways, tunnels and other structures.

About 28.9 million shipping containers passed through crowded U.S. ports last year, and gridlock is mounting. Containers entering the country languished on docks an average of seven days. Adopting the “agile port system” now being developed with help from federal agencies would boost efficiency. When the concept was tested at Washington’s Port of Tacoma, it cut cargo delays in half.


And the problem has not gotten better over the last two years. According to the American Society of Civil Engineers report card of American's Infrastructure, we received a D; Every area of US infrastructure received near failing grades.

Last week I argued that the combined infrastructure need and the high rate of unemployment among blue collar workers presents the most logical dovetailing of public need with problem solving in a generation. Employing these people does not mean they would be "spitting at the moon;" they would be increasing the efficiency of the US economy. To this, a commenter noted:

The projects are no[t] economically viable. They don't create any new wealth. When the old bridges are torn down (many still work just fine) and new ones are built, hundreds of billions of dollars would have been spent and all that will need to be paid back with interest, and the much of the spending would have drifted out of the US in the form of imports and higher commodity prices.

First, no one is advocating tearing down functioning bridges; according to all reports there are plenty of bridges that are in terrible repair that would be the natural beneficiaries of the policy. In addition, the US economy has lost about 2 million construction jobs during the recession and about another 2 million manufacturing jobs over the last 2-3 years. These people are currently receiving unemployment benefits. What is wrong with creating jobs for them that pay goods wages (and thereby increasing aggregate demand) which also increase the nation's overall economic efficiency by improving the quality of out national transportation system?

The travel time reliability of shipment by interstate highway has made "just in time" delivery more feasible, reducing warehousing costs and adding to manufacturing efficiency.

By broadening the geographical range and options of shoppers, the interstate highway system has increased retail competition, resulting in larger selections and lower consumer prices.

By improving inter-regional access, the interstate highway system has helped to create a genuinely national domestic market with companies able to supply their products to much larger geographical areas, and less expensively.

Consider the following points about my home state, Texas, from a business point of view:


What if 0% of major roads were in poor or mediocre condition and 0% of highways were congested? Think about the business advantage that would present. Lowered maintenance costs from fewer road caused accidents and lowered delivery costs from less traffic would go straight to the bottom line of all private companies utilizing the roads.

The primary argument against this type of spending is cost. However, consider this. The 10-year Treasury is currently trading at 2.62%. Even if the 10-year spikes 200 basis points in the next 6 months, we're still looking at a 4.62%. Considering the length of time these improvements will be in existence, there is no way the internal rate of return won't at least be 4.62% on an annual basis -- and probably higher when you consider the multiplier effect of jobs, lower delivery times, increased productivity etc...

After considering the need to move goods throughout the country as efficiently as possible, the above commenter couldn't be more wrong. If the US gets to the point where the only transportation line connecting two cities is a dirt road, the US will be in extreme trouble. And that's where the "infrastructure is not economically viable" crowd is leading the country.

For more on the idea of public goods, see this article at Mark Thoma's blog.
Posted by Unknown at 8:30:00 AM