The Beige Book, Part I

Yesterday, the Federal Reserve released the Beige Book. This is one of my favorite documents because it allows us to take a fairly regular, comprehensive look at the US economy. I consider it a, "you are here" report, as it tells us the status of a fairly broad range of economic numbers.

Reports on consumer spending were mixed but suggested a slight increase on balance. Most Districts reported that non-automotive retail sales rose compared with the previous reporting period or were above their levels from 12 months earlier. By contrast, Atlanta reported a decline in the level of sales, and Richmond noted that sales "sputtered" in August, while New York and Dallas reported that growth in retail sales slowed. Several Districts noted an emphasis on necessities and lower-priced goods. Boston reported that back-to-school purchases were focused on immediate needs; in Cleveland, consumers focused on "value-priced seasonal items;" and in St. Louis, Kansas City, and San Francisco, sales were relatively stronger for lower-priced items. Spending on big-ticket items such as expensive consumer electronics was weak according to Philadelphia, Richmond, and Dallas. Most Districts also reported that sales of new automobiles and light trucks were largely stable or up slightly during the reporting period, and contacts were optimistic for stable sales or slight growth over the balance of the year. A few reports indicated that inventories for various goods remained near desired levels despite slower sales in some cases, as retailers have been practicing very tight inventory management.

Consider this points from the regional district reports:

Boston: First District retailers report mixed sales results for July and early August. Year-over-year same-store sales range from decreases of 10 percent to increases in the low single-digits, and one contact quips that "flat is the new up." Back-to-school sales were modest, with the consumer focused on buying for immediate needs only. Several retailers report increases in foot traffic but also smaller average ticket size.

NY: Non-auto retailers report that sales have slowed across the District since the last report, with comparable-store sales running just 2-3 percent ahead of a year earlier, on average, in July and up just 1-2 percent in the first few weeks of August. The slowing has been particularly pronounced at New York City stores. Two major shopping malls in western New York State also report that sales weakened in July through early August, and they report substantial discounting--especially at clothing retailers.

Philadelphia: Third District retailers reported that sales rose from July to August for the back-to-school shopping period, and most of the stores surveyed posted year-over-year gains for the period. Store executives continued to note that much of the year-over-year improvement in sales has been a consequence of last year's poor results; nevertheless, many said the fundamental trend in sales was beginning to strengthen. Some merchants noted relatively healthy sales of apparel and small appliances, albeit with significant discounting, but weak sales of big-ticket consumer electronic products.

Cleveland: For the period from mid-July through mid-August, retail sales generally showed some improvement when compared to the previous 30-day period. Purchases rose slightly on a year-over-year basis. Still, consumers remain cautious in their purchases and are focusing on value-priced seasonal items.

Richmond: Retail sales sputtered in August, with most merchants reporting either flat or contracting activity. Sales declined at several building supply businesses as well as lawn and garden retail establishments. An executive at a hardware store chain in central Virginia commented that sales were flat, and he had redistributed inventory across store locations as part of an ongoing cost reduction plan to survive the weak housing market. The store manager for a discount chain store in central North Carolina reported erratic apparel sales; however, he and several other retailers were relieved that early results from back-to-school sales on other items were at least satisfactory.

Atlanta: Most District merchants reported that traffic and sales decreased in July and August. Retailers continued to keep inventory levels low and the outlook was less positive than in previous months. District automobile dealers indicated that sales increased from a year ago.

KC: Consumer spending rose modestly from the previous survey, and contacts expected further growth in the months ahead. Retail sales edged higher and were above year-ago levels at a majority of stores and malls. Purchases of energy-saving appliances and clearance items were reported as strong at several stores, while sales of luxury items such as jewelry and dining room sets were generally characterized as weak.

Dallas: Retailers noted that growth has slowed recently, but sales are up on a year-over-year basis. Customers continue to focus on non-discretionary items while shunning big-ticket purchases. Eleventh District sales trended slightly above the nation over the reporting period, a change from the previous report. Outlooks suggest that while sales growth may be slower for the remainder of the year; overall 2010 sales should show positive single-digit growth.

There are a few trends that emerge from the above points.

2.) While consumers appear willing to spend, they are opening their wallets very cautiously.

3.) This is a necessities market -- consumers are probably replacing things that have worn out and are avoiding making big purchases. 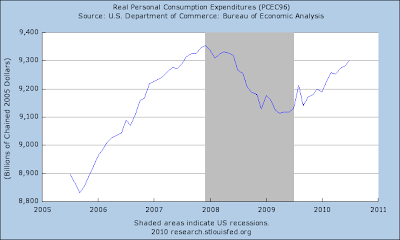 Overall PCEs are continuing to climb and are nearly at highs seen at the end of the last recession. 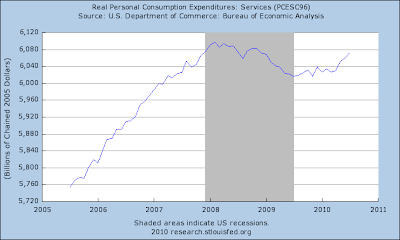 Services comprise about 65% of PCEs. Their stalling for the better part of a year was obviously a negative development. However, they are now increasing. 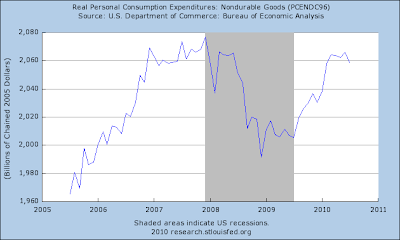 Non-durable goods account for about 22% of PCEs. This category of spending has stalled over the last few months. 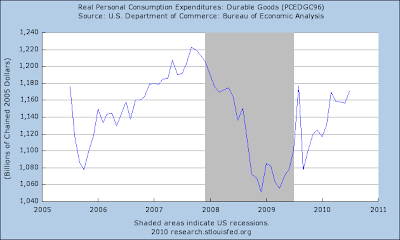 Durable goods -- which account for about 12% of PCEs have also stalled.

The topping out in durable and non-durable explains the real retail sales picture: 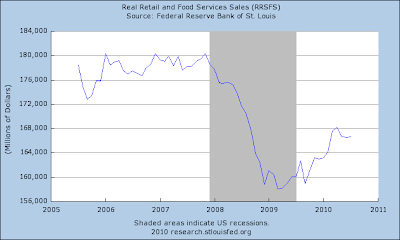 NY: Auto dealers in the Rochester area report that sales of new autos were down roughly 10 percent from a year ago in July and down 15 to 20 percent in the first half of August, while Buffalo-area dealers report a 5 percent year-over-year increase in July and project a moderate decline in August. Still, contacts in both areas describe the current sales pace as fairly good, with the 12-month comparisons depressed by last summer's "Cash for clunkers" program. Dealers report that both retail and floor-plan credit conditions have continued to improve.

Philadelphia: Third District auto dealers reported roughly steady sales during July and August at a rate somewhat above the year-ago pace. Dealers expect sales to continue to run at about the current rate for the rest of the year. However, some dealers said manufacturers' incentives are supporting sales of current model-year vehicles, and sales could slip when that supply is depleted and replaced by new model-year vehicles.

Cleveland: Auto dealers saw new vehicle sales strengthen from mid-July through mid-August, when compared with the previous 30 days. Reports also showed improving sales on a year-over-year basis. Expectations call for vehicle purchases to stabilize at current levels in the upcoming months. Many dealers continue to say that their inventories are at low levels. Used vehicle purchases are beginning to soften

Richmond: Big-ticket sales remained weak, according to several contacts. A car dealer in the Tidewater area of Virginia and another in the South Carolina Piedmont indicated that their dealerships were seeing gradual improvement. However, contacts at other dealerships reported a slowdown in sales.

Atlanta: District automobile dealers indicated that sales increased from a year ago.

Chicago: Auto sales rose in July as increased incentives spurred demand, but sales leveled off in August. Dealers continued to report that inventories were lower than desired, particularly for the most popular Ford, GM, and Chrysler models.

Minneapolis: Vehicle sales were up slightly in North Dakota, according to a representative of an auto dealers association. The owner of a Minnesota domestic auto dealer said that August sales were up from a year ago, but corporate customers were more cautious about purchases.

KC: Auto sales also increased slightly from the previous period, and nearly all dealers were optimistic about future sales. Auto inventories continued to decline, and some dealers were concerned about meeting expected demand as a result.

The general trend appears to be slightly positive. Consider this chart: 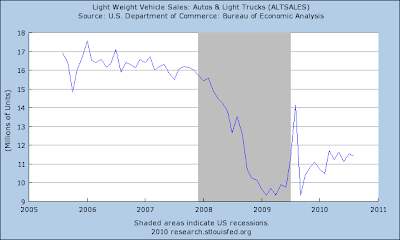 Car sales have a pretty easy year over year comparison, as last years sales were heavily impacted by the cash for clunkers program. Sales have increased from last year's bottom, but have moved sideways for the last few months.
Posted by Unknown at 9:30:00 AM