Among the 30 companies in the Dow Jones Industrial Average, the 10 that get the largest share of their sales abroad are expected to see revenues grow by an average of 8.3% over the next year, industry analysts say. By contrast, the 10 that do the least business outside the U.S. are likely to show average revenue gains of just 1.6%.

The divergence between domestic and foreign-oriented business affects the larger U.S. economy in a number of ways. At a time when unemployment remains stubbornly high, many export-oriented manufacturers are struggling to find skilled workers, while jobs that once served as a safety net for American workers, like retailing jobs, have few openings.

If the trend continues it could also drive an even larger wedge between the fortunes of highly educated workers and those with less education.

Rather than simply meeting rising demand abroad by stepping up their exports from the U.S., companies are increasingly moving production to where they sell their products—especially in developing markets, where labor costs are far lower.

This expansion abroad doesn't create any "routine" jobs at home, like working on an assembly line, says Ann Harrison, an economist at the University of California, Berkeley. But workers engaged in more specialized areas, such as research and development, which aren't as easy to move abroad, tend to benefit.

"The workers in the U.S. who are designing the goods, who are coming up with the marketing campaigns—those workers are better off," Ms. Harrison says.

This article highlights a couple of very interesting points.

1.) Over the last few weeks, we've seen strong growth rates printed in foreign economies. Brazil is growing at an 8.9% rate. Germany is also growing along with China. These markets are where the multi-national companies are. However, the US is growing slowly, making it a far less attractive market. Both New Deal Democrat and I have argued the US economy is now the global caboose. These figures bear that out.

2.) Consider this chart from Calculated Risk 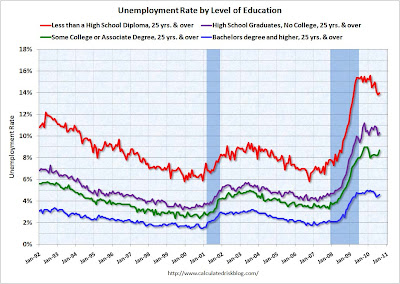 Notice that higher educational levels have a lower unemployment rate. Expect this trend to continue, especially as the US becomes less and less of a muscle jobs economy and more of a thinking jobs economy.

I recently made a presentation to my dissertation class where I made the following point: use your dissertation to create a unique, niche specialty for yourself, such that you will be one of the only people in the market to have that specialty. Then use your dissertation to publicize yourself. That is the way the US economy is moving; it is therefore imperative for the economy to invest heavily in education and make it affordable.

3.) There is a lot of political hay made of outsourcing. Some of this in understandable; moving jobs to a new location while having those jobs leave the US is obviously a politically painful situation. However, there is also the issue that as foreign markets develop and become mature, businesses simply move their operations to new locations to build markets in those new locations. Like it or not, that is how business works.