Says Ken Goldstein, economist at The Conference Board: “While the recession officially ended in June 2009, the recent pace of growth has been disappointingly slow, fueling concern that the economic recovery could fade and the U.S. could slide back into recession. However, latest data from the U.S. LEI suggest little change in economic conditions over the next few months. Expect more of the same – a weak economy with little forward momentum through 2010 and early 2011.”

Says Ataman Ozyildirim, economist at The Conference Board: “The U.S. LEI, which began rising three months before the end of the recession, remains on a general upward trend. However, the pace has been slowing. Correspondingly, current economic conditions, as measured by The Conference Board CEI, have been essentially flat since May, after reaching a bottom in June 2009. Taken together, the composite indexes are consistent with a slowly expanding economy in the near term.” 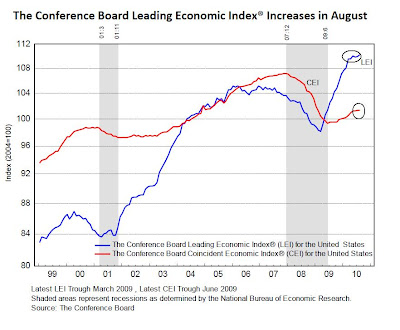 Note that while the LEIs are still increasing, the rate of increase (raise your hand if you remember "rise over run") is decreasing. This is the reason the release includes a statement that the economy will be growing slowly. Also note the same situation applies to the coincidental indicators. 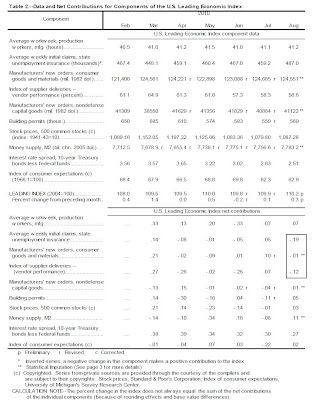 7 of the 10 indicators were positive.

Above is a chart of coincident economic indicators. What is interesting in the lower chart is that we've only seen four negative contributions from the components in the last six months and three of those were from employment. This indicates the current conditions are at worst fair.