Housing may have bottomed - but no rebound

Along with Oil, because it is a leading sector housing is the area of the economy I am most concerned about in terms of sustaining the recovery. As to sales, on the one hand there is now substantial evidence that it has bottomed, but on the other hand there is little evidence of a significant rebound.

Here is a graph of housing permits (a Leading Indicator) and starts as of yesterday: 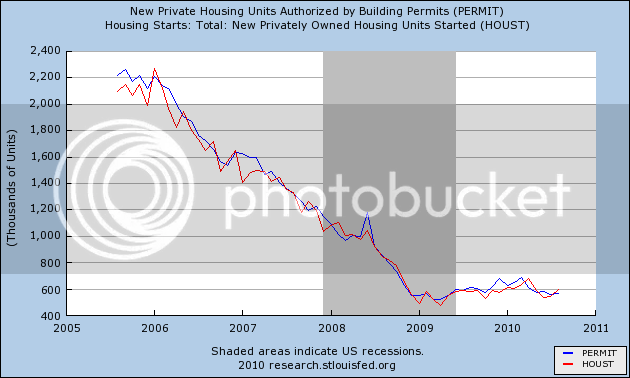 Permits did rise slightly (10,000) and starts rose significantly, but both are below 600,000 seasonally adjusted units annually. They had been above 600,000 in the early part of this year.

Meanwhile, this morning the Mortgage Bankers Association reported that purchase mortgage applications declined 3.3%. This was still 9% above the low of two months ago, but almost 40% below one year ago.

In short, there is only a slight rebound off the bottom. The cliff-diving of 2006 - 2008 is over, but we have given up between 50,000 to 100,000 units annualized from the pace that was established one year ago. This is an important reason why I expect GDP growth in the next quarter or two to be sluggish, and possibly even slightly negative in one quarter.
Posted by New Deal democrat at 10:00:00 AM