A Closer Look At PPI

Last Week we had two important data series on inflation: CPI and PPI. Let's start with a closer look of PPI:

First, PPI is broken down into three different measures: crude, intermediate and finished goods. Here is a definition of all three:

Crude materials for further processing are products entering the market for the first time that have not been manufactured or fabricated and that are not sold directly to consumers.

The stage-of-processing category for intermediate materials, supplies, and components consists partly of commodities that have been processed but require further processing. Examples of such semifinished goods include flour, cotton yarn, steel mill products, and lumber.

Within the stage-of-processing system, finished goods are commodities that will not undergo further processing and are ready for sale to the final-demand user, either an individual consumer or business firm.

The Producer Price Index for Crude Materials for Further Processing moved up 2.3 percent in August. For the 3 months ending in August, crude materials prices rose 2.5 percent after falling 1.7 percent from February to May. In August, more than half of the monthly increase can be attributed to the index for crude foodstuffs and feedstuffs, which moved up 3.5 percent. Also contributing to this broad-based advance, prices for crude nonfood materials less energy and crude energy materials rose 4.1 percent and 0.5 percent, respectively. 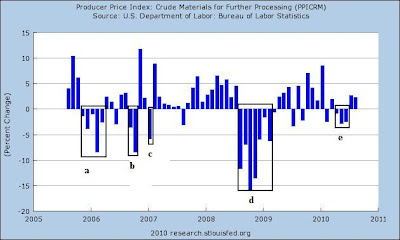 Notice that several periods of negative month over month numbers are possible with this data series. The reason is the above data is heavily influenced by commodity prices, which can be extremely volatile. We've seen two months of increases, which is a good development as it lessens the possible problems from deflation.

Let's move on to intermediate goods: 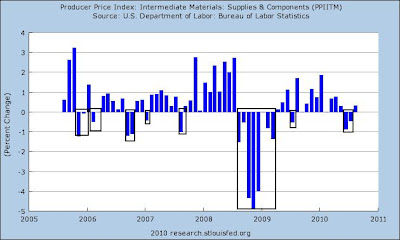 Again -- and like crude products -- notice that intermediate prices can have some pretty serious swings, largely as the result of commodity price swings. However, last month prices increased. While one month obviously does not equal a trend, it is good in that id also helps to blunt deflationary fears.

Also remember that crude and intermediate price increases are typically absorbed to some extent by businesses.

Finally, we have finished goods: 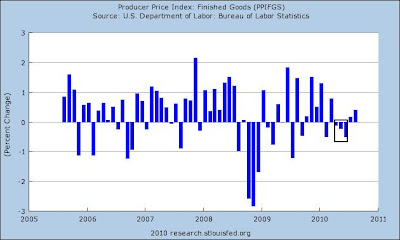 Like the other two data series, this one can and does print negative numbers from time to time, so drops should not be seen as atypical events. Also note that we've seen two increases in a row, which is a healthy development in the current environment, as it decreases the deflationary argument.

It looks as though PPI will continue increasing; from today's FT:

Cotton prices soared past $1 a pound as demand looked set to outpace supply for the fifth consecutive season in 2010-11 after flooding devastated the crop in Pakistan, the world’s fourth-largest grower.

The rally led a broad surge in agricultural and soft commodities amid weather concerns. Sugar traded above the key 25 cents a pound barrier, a seven-month high, while wheat and corn surged to a two-year high and soyabeans hit a 15-month peak.