Is the Federal Reserve Propping Up the Economy?

There are times when the internets promise is greatly undermined by its propensity to spread conspiracy theories, one of which is "the Federal Reserve is propping up the economy." Let me explain why this is false.

1.) Yes, the Fed is purchasing trillions of dollars of Federal debt. And, yes, this is probably a primary reason for lower interest rates. And, yes, this has led to an increase in the monetary base, or:

In economics, the monetary base (also base money, money base, high-powered money, reserve money, or, in the UK, narrow money) is a term relating to (but not being equivalent to) the money supply (or money stock), the amount of money in the economy. The monetary base is highly liquid money that consists of coins, paper money (both as bank vault cash and as currency circulating in the public), and commercial banks' reserves with the central bank

Here is a chart of the monetary base: 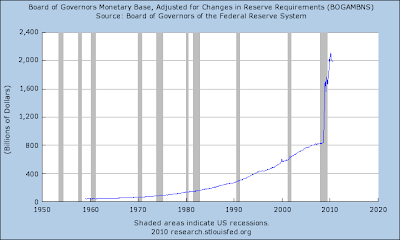 This is the chart that everybody is saying proves the Federal Reserve is "propping up the economy." But the problem is the above chart includes reserves -- which may or may not have been loaned out. If they were loaned out -- that is, if they got into the hands of the public -- then we would have a serious problem

2.) However, this theory does not take into account the other half of the monetary equation: making loans to get the excess reserves into the economy. After the Fed increases the accounts of various commercial banks on the Fed's balance sheet, the commercial banks have to make loans to place the money into the hands of the public. This is where the theory falls apart. Here is a chart of total loans and leases in the economy: 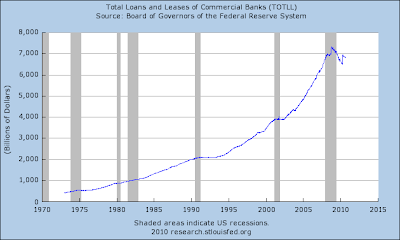 Total loans are decreasing. This has led to 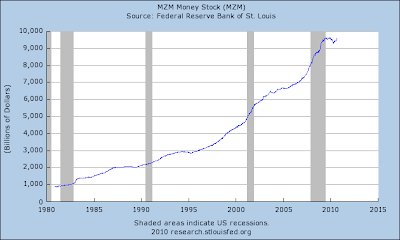 A very low rate of growth in MZM -- money with zero maturity, or

"Money with zero maturity. It measures the supply of financial assets redeemable at par on demand."

In addition, consider these two charts: 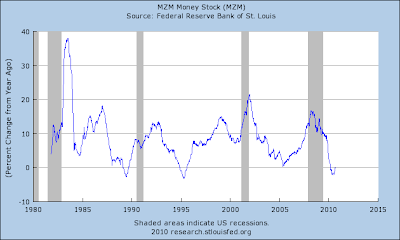 The year over year rate of growth of MZM was negative for the last few months, and 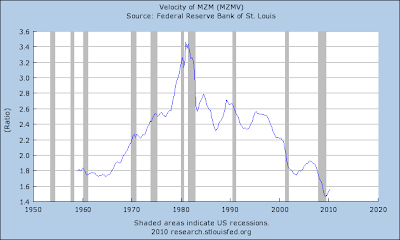 It's velocity is the slowest its been in over nearly 50 years.

In short, the Fed is not "propping up the economy." While the Fed is purchasing large amounts of bonds, those purchases are not getting into the public's hands because banks aren't lending money. In fact, the growth of the MZM was recently negative and its velocity is near 50 years lows.
Posted by Unknown at 8:30:00 AM