No, Virginia, The ECRI Drop Does Not Mean A Double Dip is Coming

When the ECRI index of leading indicators moved lower over the last few months the economic blogsphere jumped on the news, proclaiming that a double dip recession was coming down the pike. The Big Picture Blog posted a statement/explanation from the ECRI group themselves which denied this argument, only to be ignored by, well, everybody. Yesterday, the ECRI group printed another statement on the Big Picture site, again noting the drop in their index does not mean a double dip recession is coming down the pike.

However, the attention to the WLI has been accompanied by a deluge of misinformation which we tried to address in an article titled, Weekly Leading Indicators Widely Misunderstood. We’re concerned that, since then, further unenlightened commentary is still creating such confusion about this very useful tool that it will undermine confidence in its efficacy. We therefore address the main lines of criticism.

Some prominent voices representing this group of analysts, who had hurled scorn on the WLI on its way up last year, seem to have decided that the WLI is their new best friend. One widely-quoted commentator famously declared that the WLI has always been correct in calling a recession whenever its growth rate fell below a specific threshold. Many who read this concluded, in essence, that the WLI was infallible as a recession predictor. All we can say is that we’re flattered, but if there’s anyone who thinks that an infallible economic indicator actually exists, he should get in touch with us right away, as there’s a wonderful bridge we’d like to sell him.

It’s true enough, based on the four decades of publicly available data, that WLI growth has never dropped this far without a recession. What most don’t know – apart from the fact that the WLI growth rate shouldn’t be used to predict recessions in the first place – is that, based on two additional decades of data not available to the general public, there are a couple of occasions (in 1951 and 1966) when WLI growth fell well below current readings, but no recessions resulted.

In our book, we’ve described in detail how we look for pronounced, pervasive and persistent cyclical swings in multiple leading indexes in order to make a recession or recovery call. This is a disciplined, objective process we’ve always followed, allowing the chips to fall where they may. Our forecasting approach hasn’t changed, regardless of the torrent of criticism directed at ECRI or the WLI by interested parties.

The U.S. economy is now firmly in the grip of the economic slowdown that we’ve been predicting at least since January. The reality is that, historically, a little more than half of such slowdowns have culminated in recession. Thus, we already knew back in January that, once this slowdown began, there would be a significant risk of recession.

However, a recession is hardly baked in the cake, which is why we aren’t making a recession call at this time. Simply put, we don’t predict the predictors. If we see our collection of leading indexes (including the USLLI, which turns ahead of stock prices) swing decisively toward the recession track, we’ll make a clear recession call. Until then, we’ll keep monitoring our leading indexes, as we’ve done for decades.

For me, these graphs that I printed last week put the issue in perspective. 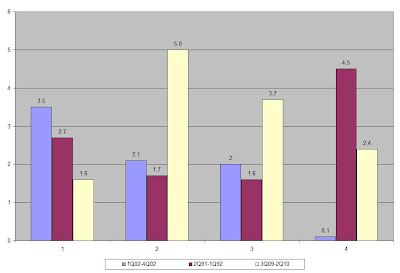 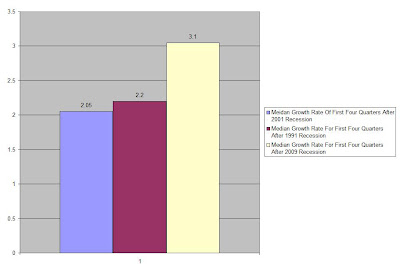 And the median growth rate for this recovery is nearly a percentage point higher than the previous recoveries.

Over the last month or so we have seen a slowdown in the manufacturing sector. However, None of those indicators have moved into contraction; they are all showing a slower expansion in that part of the economy. And the dollar's recent drop should lead to higher export totals in the coming months. Yesterday's ISM number for the service sector showed an increase. PCEs have slowed as well, but they are not crashing either. In short, things are slowing; they are not dying.
Posted by Unknown at 11:30:00 AM