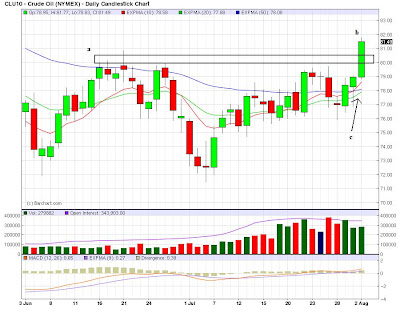 The big news yesterday was oil moving through the $80/bbl level (a and b). Also note the increasingly bullish EMA picture -- the 10 and 20 EMAs are now moving over the 50 day EMA. 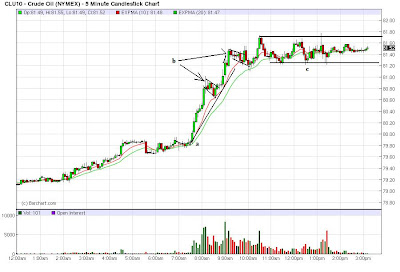 Yesterday's moves all happened in the opening time period. Prices moved higher quickly (a),, consolidated along the way (b) and then spent the rest of the day consolidating. 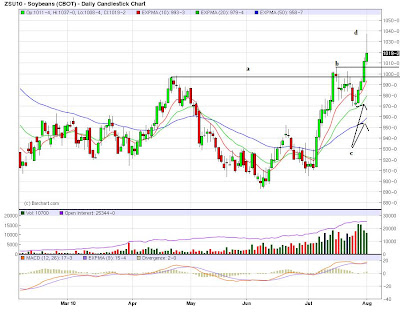 I've mentioned the wheat market over the last week. Notice that soy beans are now also moving into 6 month highs -- prices (d) have moved through key resistance (a and b) and the EMA picture is turning bullish -- all the EMAs are moving higher and the shorter EMAs are above the longer EMAs. Also note the strength of the rally over the last week -- prices are printing very strong bars.

Prices moved through important resistance early yesterday (a and b).

Prices gapped higher at the open (a), ran into previously established resistance which provided both support (b) and resistance (c) and then consolidated for most of the day, ending with a small rally (d).

The Russell 2000 had a large sell-off yesterday, which probably kept things from moving higher for the lat morning and early afternoon.

Prices gapped higher yesterday (a) and the uptrend is still intact (a).
Posted by Unknown at 5:00:00 AM