Total nonfarm payroll employment declined by 131,000 in July, and the unemployment rate was unchanged at 9.5 percent, the U.S. Bureau of Labor Statistics reported today. Federal government employment fell, as 143,000 temporary workers hired for the decennial census completed their work. Private-sector payroll employment edged up by 71,000.

Here are charts of the relevant data: 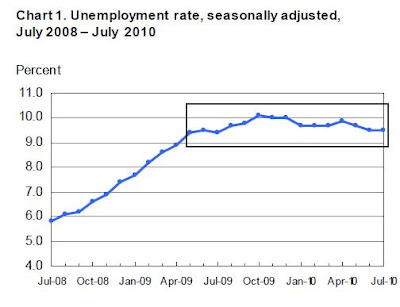 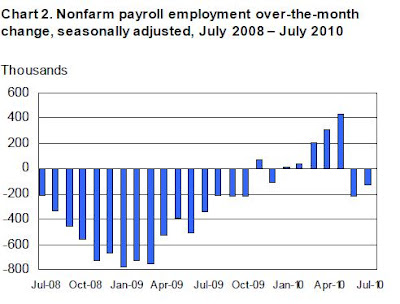 The labor force participation rate -- the percentage of people actually part of the labor force was unchanged at 64.6%, but this number has decreased .6% since April.

The household survey showed a decline of 159,000 jobs.

On a scale of 1-10, I'd give this report a 3.5. While positive, it's clear the pace of hiring is slowing and needs to accelerate for the recovery to gain steam.
Posted by Unknown at 7:45:00 AM