On Friday, prices ended the week at important levels. They are right at Fibonacci levels from the 10 day lows and highs and are also between areas of support and resistance (a and b).

Prices are in an uptrend (a). Also note the EMAs are in a tight configuration, indicating a lack of direction. The shorter EMAs are moving higher (the 10 and 20), but they are not moving up at a very steep angle. Last week I noted that ideally prices should test the 200 day EMA before moving higher.

The 7-10 year part of the curve is still in a rally, having bounced off its trend line again.

However, the long-end of the curve has moved below its trend line. 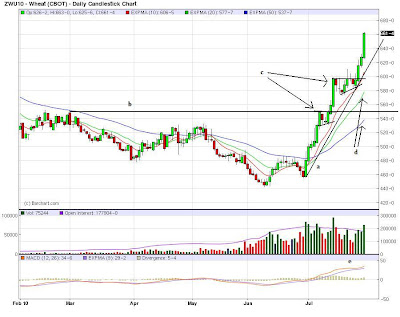 Wheat is still a very hot commodity market. Prices are in an uptrend (a) and have broken through important technical resistance (b). Also note that prices have consolidated gains along the way (c). Finally, the EMA picture is very bullish (d) with the shorter EMA moving above the longer EMAs and all the EMAs moving higher. 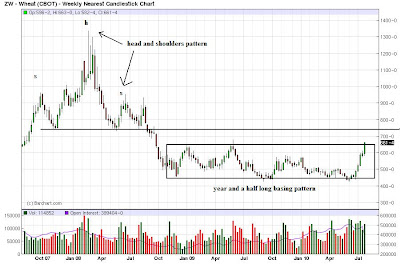 From a longer-term perspective, prices formed a head and shoulders pattern in late 2007 and early 2008. Prices have been forming a base for about a year and half since then and are getting ready to move higher. 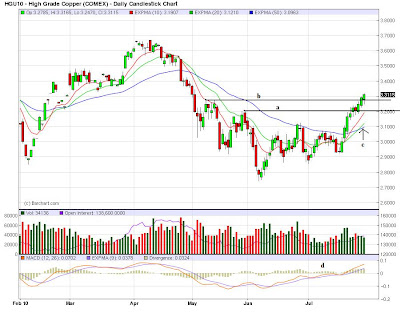 Copper continues to move higher. Prices have moved through important resistance levels (a and b). The EMA picture continues to improve with prices above the EMAs, and the shorter EMAs now moving through the longer EMAs (c). Finally, the MACD indicates we have positive momentum (d).
Posted by Unknown at 5:00:00 AM