Yesterday, the Federal Reserve issued the Senior Loan Officer Survey. Here is a summation of the reports findings:

The January survey indicated that commercial banks generally ceased tightening standards on many loan types in the fourth quarter of last year but have yet to unwind the considerable tightening that has occurred over the past two years. The net percentages of banks reporting tighter loan terms continued to trend lower.2 Banks reported that loan demand from both businesses and households weakened further, on net, over the survey period.

For many major loan categories covered by the survey, the net percentages of respondents that tightened standards in the fourth quarter of 2009 were close to zero. However, banks continued to tighten a number of terms on loans to both businesses and households, although the net fractions of banks that reported doing so in the January survey generally stepped down again. Banks' policies on commercial real estate lending were an exception, as large net fractions of respondents further tightened their credit standards during the final quarter of last year. In addition, banks reported that they had tightened terms on CRE loans substantially over the past year.

Demand from both businesses and households for all major categories of loans weakened further, on net, over the past three months. The net fractions of banks that reported weaker demand for business loans continued to decline, while changes in the comparable readings on demand for loans to households were mixed.

Here are the relevant charts from the report. Click on all charts for a larger image: 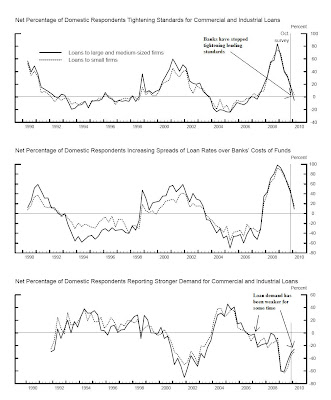 The percentage of lenders tightening standard for commercial and industrial loans (C and I loans) is now at 0. However, loan demand is still weak. 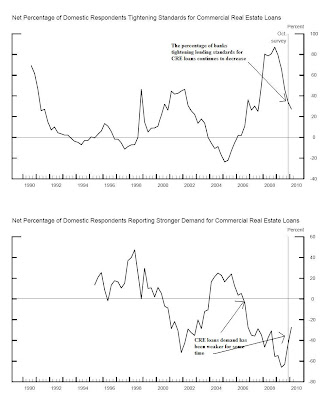 The percentage of lenders tightening standard for commercial real estate (CRE) loans is decreasing, but loan demand is still weak. 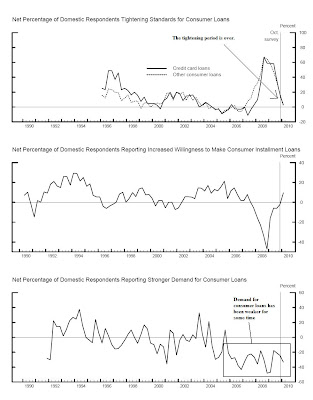 The percentage of lenders tightening standards for consumers loans is now at 0, but demand is still weak. 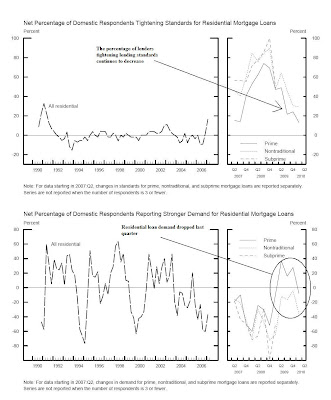 The percentage of lenders tightening lending standard for residential real estate loans is decreasing, but demand also dropped last quarter.
Posted by Unknown at 11:30:00 AM