There's a lot of buzz this morning about a NY Times article documenting the increasing number of homeowners who are "doing the math" and deciding it makes no sense to continue paying the mortgage. They are simply letting the bank have their property, and walking away, a/k/a "jingle mail."

[B]y the third quarter of 2009, an estimated 4.5 million homeowners had .. their home’s value dropping below 75 percent of the mortgage balance.
....

[A] growing body of research indicates that significant numbers of borrowers are declining to live under what some waggishly call “house arrest.”

Using credit bureau data, consultants at Oliver Wyman calculated ... that about 17 percent of owners defaulting in 2008, or 588,000 people, chose that option [of walking away] as a strategic calculation.

I'd like to challenge the conventional wisdom (I know, you're shocked) and suggest that this is probably a good development, placed in larger context.

One of the most widely used graphs in the blogosphere a few years ago was this one, dating from January 2007 ("month 1" in the description) showing an initial wave, now passed, of subprime ARM resets, and a subsequent wave of option-ARM and jumbo resets and recasts (picking up steam now and really taking off later this spring): 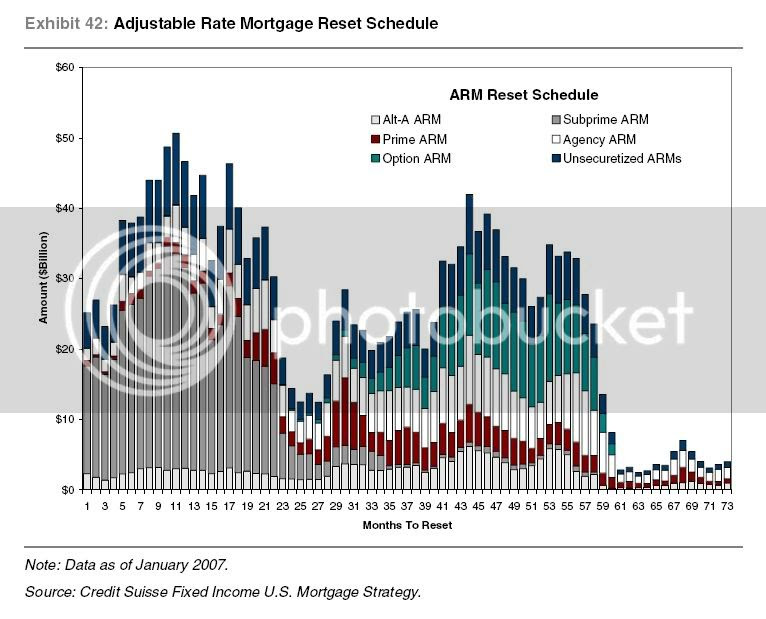 The typical argument, set forth among other places in a leading article at the place where I used to blog, is that this means that foreclosures are about to explode, more homeowners will be living out of cardboard boxes and we are all Doomed!!!

My rejoinder has been that these homeowners presumably did not spend the last 3 years like deer in the headlights, but did occasionally notice the housing implosion happening all around them, and many if not most may have already taken action, such as selling the place early for as much as they could get. The Times article suggests I've been right:

Mr. Koellmann ... bought a small, plain one-bedroom apartment for $215,000.... He put down 20 percent and received a fixed-rate loan from Countrywide Financial.

Not quite four years later, apartments in the building are selling in foreclosure for $90,000.

“There is no financial sense in staying,” Mr. Koellmann said. With the $1,500 he is paying each month for his mortgage, taxes and insurance, he could rent a nicer place on the beach, one with a gym, security and valet parking.

Don't know about you, but to me Mr. Koellman's actions look perfectly rational. And as the article mentions, there are a burgeoning number of people just like him.

Undoubtedly this will drive the price of houses down even further, but as this graph of Case-Schiller house prices shows, they need to drop further to get back to a more normal valuation: 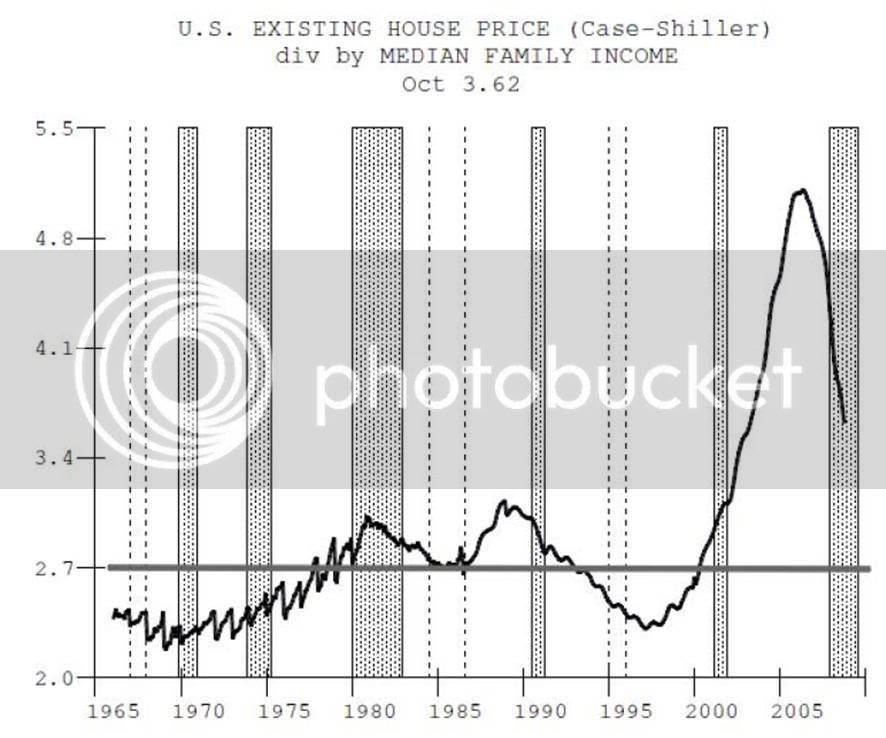 So in other words, the series is: homeowner walks away ---> gets cheaper, better apartment or house ---> housing prices go down further, becoming more affordable ---> foolish (bank) creditors take the haircut, debtors can increase new spending and stimulate the economy.