The Face of US Manufacturing is Changing

America's industrial base is undergoing its most radical restructuring in decades as manufacturers rethink their businesses in the wake of the recession.

From Dow Chemical Co. to Intel Corp., iconic companies are telling stories of wrenching change—both contraction and recovery—as they report their earnings for 2009.

Dow Chemical said Tuesday it is aiming to shed some $2 billion worth of basic-chemical factories and other assets this year as it moves into more-profitable specialty chemicals. Appliance maker Whirlpool Corp. said it cut about a tenth of its capacity in 2009 as it struggled with a 9.6% drop in sales. Intel, by contrast, is investing billions of dollars in its U.S. plants as demand for computer gear recovers.

"We are emerging from one of the most challenging economic environments we've seen in decades," said Whirlpool Chief Executive Jeff Fettig, in a conference call Tuesday. "We view 2010 as a full year of recovery for our company."

The latest moves are accelerating the U.S. manufacturing economy's longer-term decline, as well as its shift away from heavy sectors, such as automobiles and basic chemicals, toward higher-tech products like super-fast computer chips. In some cases, as with auto makers, companies are shrinking to adjust to diminished U.S. demand or investing in smaller, more efficient facilities. In others, companies such as chemical makers are relocating labor-intensive operations to countries where workers are cheaper. 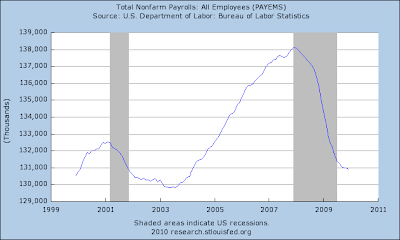 On a seasonally adjusted basis, total employment has dropped by about 7 million jobs. Of that total 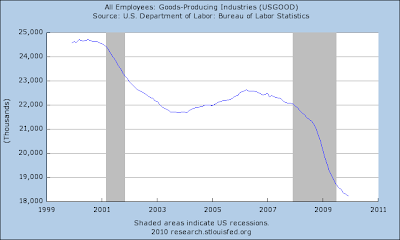 About 61% (about 22.5 million to 18.25 million) of those losses is from goods producing industries. That means the big areas of loss for this recession is in manufacturing. Underseath the surface we see the following changes:

The restructuring now under way offers insights into what kinds of goods the U.S. should produce, and in what volumes. In industries such as automobiles, housing and appliances, the move to shed capacity is at least partly correcting distortions that built up over many years of easy credit and profligate consumer spending. Companies now are adjusting to lower demand.

The situation is different for semiconductor makers, which saw U.S. demand recover sharply as computer makers scrambled to catch up with a pickup in business investment toward the end of 2009. Intel, which produces chips in Chandler, Ariz., Rio Rancho, N.M. and Hillsboro, Ore., boosted its capital investments to $1.08 billion in the fourth quarter, up 15% from the previous quarter and part of a two-year, $7 billion program to upgrade its U.S. plants.