Question of the day: Does being a supply-sider mean that you pay no attention whatsoever to the demand side of the equation or other factors that may be at play?

Taking a page from Art Laffer's June Wall St. Journal op-ed, Jerry Bowyer is sounding the inflation alarm because of all the money that's "sloshing around the system."

Laffer used the following chart in his Journal op-ed to make his point:

Instead of YoY percentage change, Bowyer looks at the same data (or something very close to it) in terms of dollar change from year-ago levels: 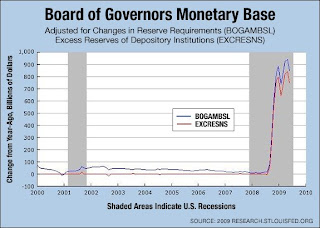 Mr. Bowyer asks: "But what happens when the floodgates open? At some point the banks will have to release a river of liquidity. Consumers are demanding it, Congress is demanding it, and even President Obama is demanding it. (That last one may well be the clincher.)"

(Let's leave aside for the moment that consumers are demanding no such thing and that no matter how much pressure Congress or the president put on the banks, no one can force consumers to borrow.)

It's pretty scary stuff, eh, all this liquidity sloshing around the system?

Before I even get to the gist of the matter, let's just dispense with Mr. Bowyer's nonsensical claim that "consumers are demanding" that banks open their "floodgates" and begin lending again.

As Exhibit One and Exhibit Two (and I probably don't need to go any further), I offer up – via the Federal Reserve – the delinquency rates on residential real estate loans and credit cards: 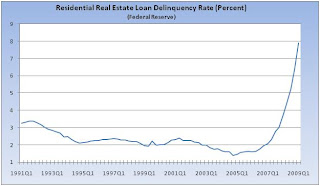 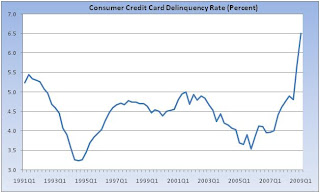 Yup. Consumers, who are delinquent on their obligations in record numbers, are clamoring for more credit. How some folks are so comfortable writing fact-free pieces is simply beyond me.

Anyway, here's the point that Mr. Laffer and Mr. Bowyer are apparently missing (as evidenced by the two charts above): There's no demand for the money that's "sloshing around the system," and there likely isn't going to be for some time to come – and by that I mean years, not months or quarters.

Our 25 year experiment with debt and leverage is over. Done. Finished. Not coming back any time soon. As you read what follows, read it in the context of the fact that the US consumer has, for the past 8 years, represented approximately 70% of our nation's GDP (roughly $10 out of $14 trillion). 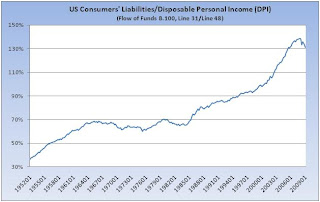 The mean of this metric is 77%. To get back to that mean – and I'm not suggesting we'll get there – in the absence of an increase in DPI implies a decrease in liabilities of $5.8 trillion dollars. Not the stuff of which inflation is made, and not the stuff that has me worried about an $800 billion increase in the monetary base. Now, keep in mind that "organic" income has not been growing, in fact it has been shrinking. The only component of income that has been growing is Government Benefits.

Other metrics tell a similar story. Here is Household Debt Service Payments as a Percent of Disposable Personal Income: 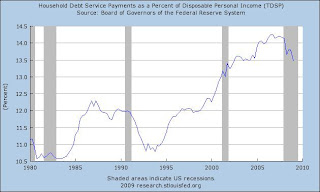 As I've mentioned before, Baby Boomers – defined as those born between 1946 and 1964 – will not be coming to the rescue, as the median boomer (born 1955) was 52 when this recession started. He (or she) will not be propping up the economy as was the case in previous recessions when s/he was much younger and still consuming and/or trading up: 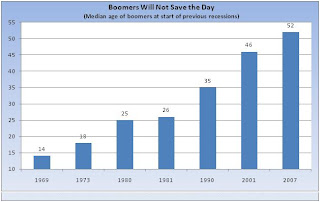 Look at the growth of the accumulation of "stuff" – consumer durable goods – over the past 29 years: 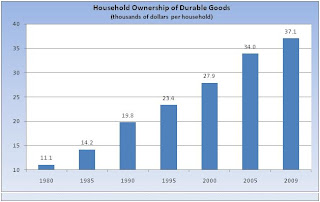 Not only will we not be buying much more stuff than we've already got, we've begun storing our current stash of belongings at an alarming rate. Some tidbits from the Self Storage Association (the first two are truly staggering):

It's been fascinating over the past many months to read the commentary that has treated this recession as a typical garden-variety type that will resolve itself as most of those in the post-war era have. Doing so severely understates the magnitude of the changes we are undergoing, from a secular change in the way we view and use credit to the adverse effects of our demographics.

In short, we're facing – and working through -- a crisis that has been in some regards 25 years in the making, supported by an outsized generation of over-consuming Americans to which there is no successor. The "inflation hawks" who are worried about the growth in the monetary base are simply missing the bigger picture. As David Rosenberg wrote in a recent note:
“Most pundits who crow about green shoots and about an inventory restocking in the third quarter giving way towards some sustainable economic expansion live in the old paradigm. They don’t realize, for whatever reason, that the deflationary aftershocks that follow a post-bubble credit collapse typically last for 5 to 10 years. Businesses understand better than the typical Wall Street or Bay Street economist and strategist that everything from order books, to output, to staffing have to now be restructured to adequately reflect a permanently lower level of leverage in the economy.”
Posted by Invictus at 1:00:00 PM