Aggressive policy actions taken around the world last fall may well have averted the collapse of the global financial system, an event that would have had extremely adverse and protracted consequences for the world economy. Even so, the financial shocks that hit the global economy in September and October were the worst since the 1930s, and they helped push the global economy into the deepest recession since World War II. The U.S. economy contracted sharply in the fourth quarter of last year and the first quarter of this year. More recently, the pace of decline appears to have slowed significantly, and final demand and production have shown tentative signs of stabilization. The labor market, however, has continued to weaken. Consumer price inflation, which fell to low levels late last year, remained subdued in the first six months of 2009.

To promote economic recovery and foster price stability, the Federal Open Market Committee (FOMC) last year brought its target for the federal funds rate to a historically low range of 0 to 1/4 percent, where it remains today. The FOMC anticipates that economic conditions are likely to warrant maintaining the federal funds rate at exceptionally low levels for an extended period.

At the time of our February report, financial markets at home and abroad were under intense strains, with equity prices at multiyear lows, risk spreads for private borrowers at very elevated levels, and some important financial markets essentially shut. Today, financial conditions remain stressed, and many households and businesses are finding credit difficult to obtain. Nevertheless, on net, the past few months have seen some notable improvements. For example, interest rate spreads in short-term money markets, such as the interbank market and the commercial paper market, have continued to narrow. The extreme risk aversion of last fall has eased somewhat, and investors are returning to private credit markets. Reflecting this greater investor receptivity, corporate bond issuance has been strong. Many markets are functioning more normally, with increased liquidity and lower bid-asked spreads. Equity prices, which hit a low point in March, have recovered to roughly their levels at the end of last year, and banks have raised significant amounts of new capital.

Many of the improvements in financial conditions can be traced, in part, to policy actions taken by the Federal Reserve to encourage the flow of credit. For example, the decline in interbank lending rates and spreads was facilitated by the actions of the Federal Reserve and other central banks to ensure that financial institutions have adequate access to short-term liquidity, which in turn has increased the stability of the banking system and the ability of banks to lend. Interest rates and spreads on commercial paper dropped significantly as a result of the backstop liquidity facilities that the Federal Reserve introduced last fall for that market. Our purchases of agency mortgage-backed securities and other longer-term assets have helped lower conforming fixed mortgage rates. And the Term Asset-Backed Securities Loan Facility (TALF), which was implemented this year, has helped restart the securitization markets for various classes of consumer and small business credit.

Earlier this year, the Federal Reserve and other federal banking regulatory agencies undertook the Supervisory Capital Assessment Program (SCAP), popularly known as the stress test, to determine the capital needs of the largest financial institutions. The results of the SCAP were reported in May, and they appeared to increase investor confidence in the U.S. banking system. Subsequently, the great majority of institutions that underwent the assessment have raised equity in public markets. And, on June 17, 10 of the largest U.S. bank holding companies--all but one of which participated in the SCAP--repaid a total of nearly $70 billion to the Treasury.

Better conditions in financial markets have been accompanied by some improvement in economic prospects. Consumer spending has been relatively stable so far this year, and the decline in housing activity appears to have moderated. Businesses have continued to cut capital spending and liquidate inventories, but the likely slowdown in the pace of inventory liquidation in coming quarters represents another factor that may support a turnaround in activity. Although the recession in the rest of the world led to a steep drop in the demand for U.S. exports, this drag on our economy also appears to be waning, as many of our trading partners are also seeing signs of stabilization.

Despite these positive signs, the rate of job loss remains high and the unemployment rate has continued its steep rise. Job insecurity, together with declines in home values and tight credit, is likely to limit gains in consumer spending. The possibility that the recent stabilization in household spending will prove transient is an important downside risk to the outlook.

Here is the story in pictures. Consumer spending has stabilized at low levels: 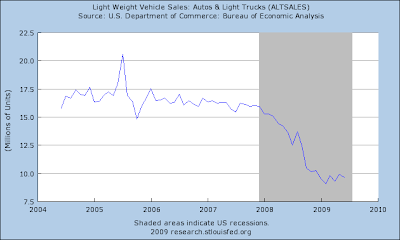 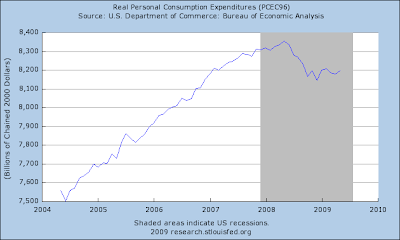 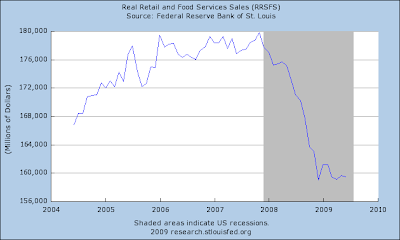 However, consumer sentiment is dipping: