Three of four metrics closely followed by the NBER have had recent releases and are now updated through June. The St. Louis Fed does a great job tracking just about everything (20,000+ data series), and the following images are courtesy of their "Track the Recession" page.
First up, because it's almost assuredly most important, is Employment: 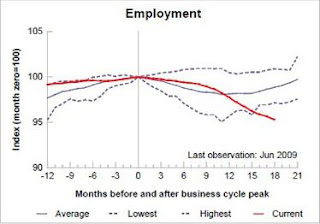 We are, regrettably, still bleeding jobs, and likely will be for a while. Not only might this be the worst recession in terms of job losses on record, we are probably going to see the mother of all jobless recoveries when the economy eventually turns. (As an aside, I suspect that a very stubbornly high unemployment rate through 2010 is likely to cause some problems for many politicians -- mostly Democrats -- who are running for re-election.)
Next up, let's take a look at Industrial Production: 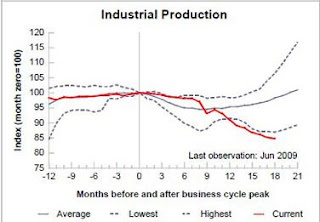 No recovery here yet. (Along with very weak Industrial Production, we also know that Capacity Utilization is at record lows, meaning that not only is there tremendous -- and growing -- labor slack, there's also way too much slack in production capacity.)
Moving on to Real Income: 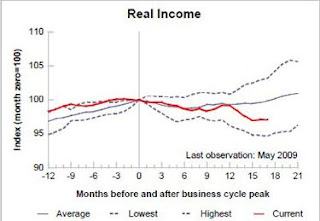 Maybe -- maybe -- a sign of some stabiliztion. BUT, with so much slack in the labor market it is entirely possible, perhaps even likely, that we simply will not see an upturn in this metric, and may indeed see another leg down as wage deflation takes hold.
Last comes Real Sales: 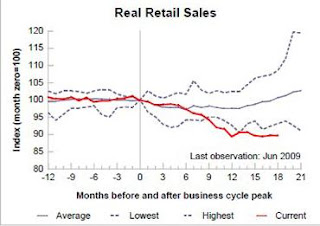 Again, perhaps a stabiliztion, but it's still unclear which way we're going to break on this one, particularly if Income doesn't go up and the consumer continues to hunker down.
A couple of other things we know:
Second quarter GDP will likely print slightly negative, maybe -0.5 or so (for the third consecutive quarter of negative prints). The third quarter may well print positive, in fact I believe it will. HOWEVER, positive quarterly GDP happens during recessions -- heck, we had two such quarters in 2008, and many others in previous recessions. So I'd hardly look at a positive Q3 and sound the all-clear.
All in I'm still very dubious of the notion that the recession has ended. I just don't see it in the data we know the NBER follows. Having said that, some recent "green shoots" have wilted a bit (see: Employment from May's release to June's), and much of what's being touted as good news is either simply noise or not relevant to making a recession call (has the NBER ever cited Housing Starts or Building Permits in one of its proclamations?).
This is really just a quick-and-dirty look at what matters most to the NBER in its decision-making process.
More as time allows.
Posted by Invictus at 9:30:00 AM