From Invictus: My Favorite Metric

I’ve written elsewhere on many occasions about a fascinating metric compiled by the Chicago Fed – the Chicago Fed National Activity Index (CFNAI). The CFNAI is an amalgam of 85 distinct data points:

“The index is a weighted average of 85 indicators of national economic activity. The indicators are drawn from four broad categories of data: 1) production and income; 2) employment, unemployment, and hours; 3) personal consumption and housing; and 4) sales, orders, and inventories.

Historically, a 3-month MA reading less than -0.70 has signaled the onset of recession and, in fact, this time around we printed -0.83 in February of 2008.

The folks at the Chicago Fed advise that the 3-month moving average provides a better look at the economy than any single month’s release:

“Month-to-month movements can be volatile, so the index’s three-month moving
average, the CFNAI-MA3, provides a more consistent picture of national economic growth.”

The June number was released today at 8:30 eastern, and here’s what the 3-month MA looks like: 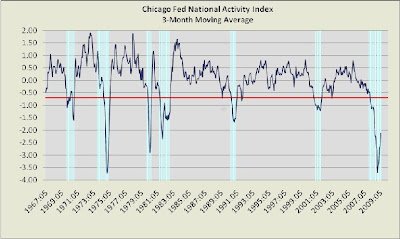 The trough was almost certainly the -3.67 print we saw in January 2009, a truly horrific reading.

Today’s -2.12 (3-month MA) is a step in the right direction, but in historical terms doesn’t signal an economy that’s emerged from recession. A couple more months of continued improvement (I write with fingers crossed) would probably signal the recession’s end, and then we can really get down to the business of worrying about what the recovery will look like.

More info on the CFNAI can be found here. It is among my favorite – and most definitely under-publicized – measures.
Posted by Unknown at 1:11:00 PM