Simply put, that is a great looking chart. It tells us we are in a trend of declining job cuts. It also bodes well for the future. Combine that with this chart:

While the 4-week number increased, the week over week decreased. In other words, it still looks as though the front-end of the employment situation is getting better. However, there are still major issues out there on the employment front. "But the alarming news in the report was a sizable 110,000 jump in continuing claims for the May 16 week. The gain was the 19th in a row and at 6.608 million sets another record high."

In addition, consider this chart from Calculated Risk: 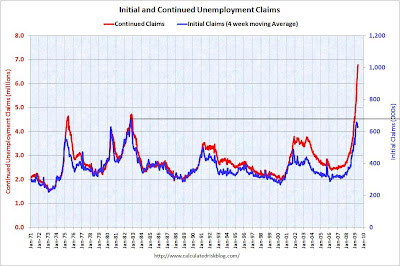 Notice that initial claims are near the high level established in the early 1980s. While past performance is no guaranty of future performance, it is interesting that we're at the same level.
Posted by Unknown at 11:30:00 AM