Nonfarm payroll employment fell by 345,000 in May, about half the average monthly decline for the prior 6 months, the Bureau of Labor Statistics of the U.S. Department of Labor reported today. The unemployment rate continued to rise, increasing from 8.9 to 9.4 percent. Steep job losses continued in manufacturing, while declines moderated in construction and several service-providing industries.

Let's look at two important charts from the report: 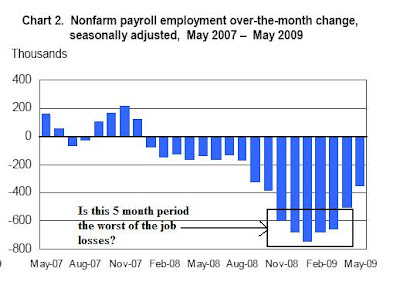 The chart above indicates we may have bottomed from the employment perspective. In addition:

Most of the job losses have occurred in Maunfacturing.

Bottom line: this is a very encouraging report. It signals things are moving in the right direction.
Posted by Unknown at 9:32:00 AM