Demand for commercial and industrial loans is down, but

Notice that lending standards for C and I loans took a sharp upward turn in the 2Q07 and have been tightening for the most part since. However there is some good news in the latest report:

On net, about 40 percent of domestic respondents, compared with around 65 percent in the January survey, reported having tightened their credit standards on commercial and industrial (C&I) loans to firms of all sizes over the previous three months. On balance, domestic banks have reported tightening their credit standards on C&I loans to large and middle-market firms for eight consecutive surveys and to small firms for ten consecutive surveys. Although 40 percent is still very elevated, the April survey marks the first time since January 2008 that the proportion of banks reporting such tightening fell below 50 percent. 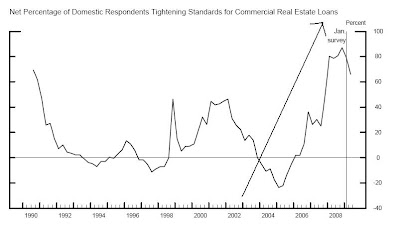 The percentage of respondents tightening CRE loans is decreasing although 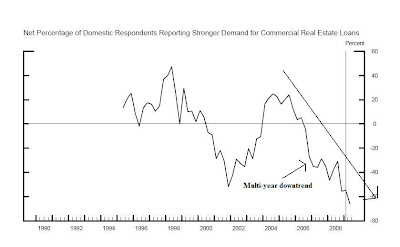 The demand for CRE loans is still depressed.

About 65 percent of domestic banks, on net, reported tightening their lending standards on commercial real estate (CRE) loans over the previous three months, compared with about 80 percent in the January survey. On balance, domestic banks have been tightening credit standards on CRE loans for 14 consecutive surveys, and the April survey marks the first time since October 2007 that the net proportion of banks reporting such tightening fell below 70 percent. 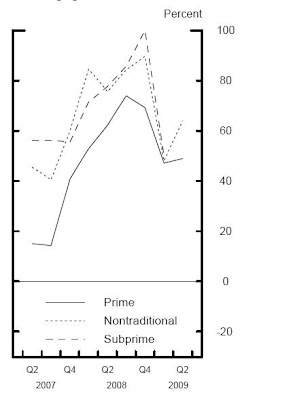 Finally, the number of banks tightening residential credit increased although 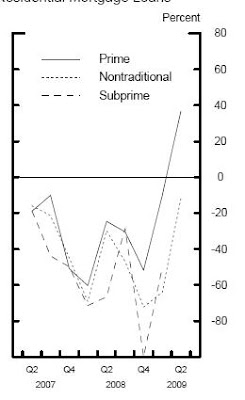 Frankly, this report is good and should be a reason why people think things are getting better.
Posted by Unknown at 2:30:00 PM