When economic conditions deteriorate, greater attention is paid to persons who are without work and seeking jobs—the unemployed. At such times, there is also greater interest in a group of persons who do not meet the official definition of unemployment but who have shown interest in labor force participation. These individuals—referred to as “marginally attached to the labor force”—wanted and were available for work and had looked for a job sometime in the prior 12 months. They were not counted as unemployed because they had not actively searched for work in the past 4 weeks. The number of persons who were marginally attached to the labor force increased sharply during the current recession, rising to 2.1 million in the first quarter of 2009. 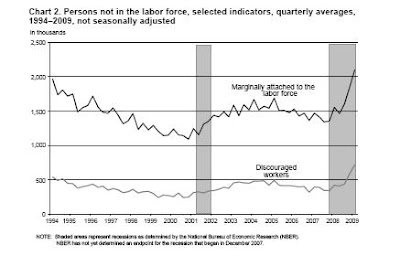