Are There Signs of Recovery in the New Homes Market?

Investors and first-time buyers, the traditional harbingers of a housing rebound, are out in force here, competing for bargain-price foreclosures. With sales up 45 percent from last year, the vast backlog of inventory has diminished. Even prices, which have plummeted to levels not seen since the beginning of the decade, show evidence of stabilizing.

Indications of progress are visible in other hard-hit areas, including Las Vegas, parts of Florida and the Inland Empire in southeastern California. Sales in Las Vegas in March, for example, rose 35 percent from last year.

“It’s fragile, and it could easily be fleeting,” said an MDA DataQuick analyst, Andrew LePage. “But history suggests this is how things might look six months before prices bottom out.”

The story has many important caveats.

Instead, this is what passes for wild-eyed optimism: a belief that things have finally stopped getting worse. “A period of price stagnation would boost a lot of spirits,” Mr. LePage said.

When a market bottoms, foreclosures usually stop piling up and banks become more willing to make loans, confident the collateral backing them will not fall in value.

Nationally, signs of progress in real estate are still faint at best. Existing home sales in March were down 7 percent from last year, according to the National Association of Realtors.

The supply of unsold homes was about 10 months, a number that has changed little over the last year and is abnormally high. But first-time buyers were an impressive 53 percent of the market — and that was largely before a first-time buyer’s tax credit of $8,000 became available.

With the tax credit in place and interest rates low, the pace of sales may be picking up. The Realtors’ group said Monday that the number of houses under contract in March was up 1 percent from a year earlier. Those pending deals will be reported in the existing-home sales for April and May.

Sales volume tends to recover long before prices. In fact, some analysts think price declines in many markets are accelerating. First American CoreLogic, a real estate data firm, reported that “the depth and breadth of price declines continued to worsen in February.” Fitch Ratings recently revised its estimate of future declines to 12.5 percent, from 10 percent, saying the drop would extend to the end of next year.

Let's look at some data to see how it's playing out.

The overall trend in new home sales is clearly down. The last two months we have possibly seen a bottom in sales, but we need more data before we make that call. In addition The months of available supply at the current sales pace is really high indicating we've got a ton of work to do before we can claim victory. 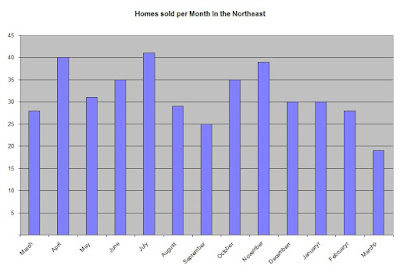 Total sales in the North East are down over the last three months and are below year ago levels. 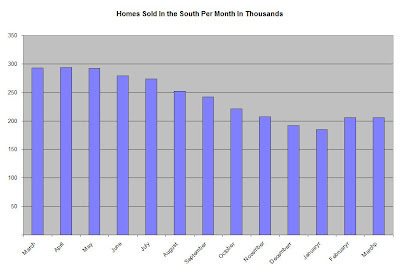 Sales in the South may have bottomed. But we need more data to make that call. And we've below year ago levels as well. 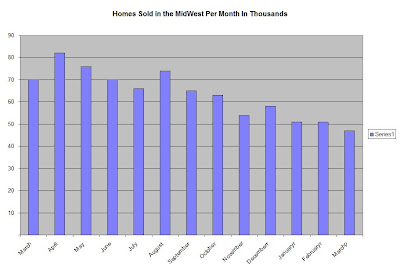 Sales in the mid-west are down and are below year ago levels. 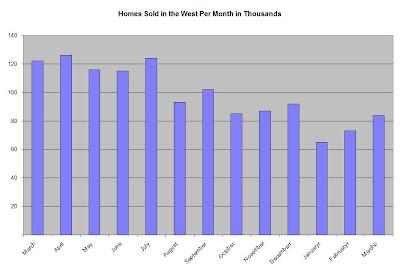 Sales in the West have risen the last two months but are the overall trend since last July is down and we're still seeing current levels below year ago levels. 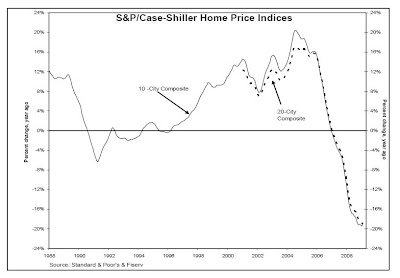 And the Case Shiller Index tells us prices are still falling at fast rates. And consider this chart of city's real estate prices. 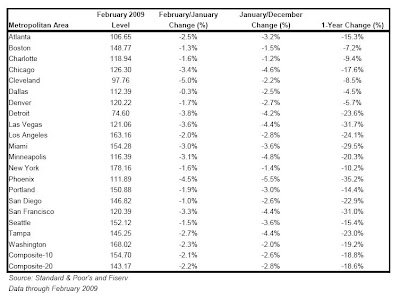 God I feel like the big bad bear to whom nothing is ever enough. But I just don't see enough data to say things are getting better.
Posted by Unknown at 10:00:00 AM