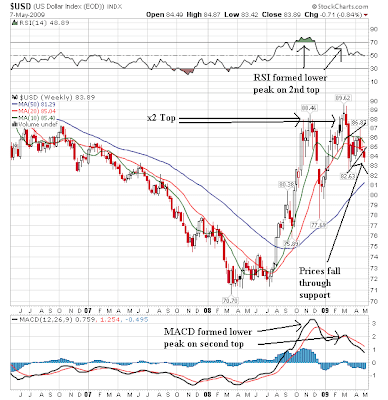 It's been really interesting watch the weekly chart evolve. Prices formed a double top over the last 6-9 months but have since fallen from the second peak. Notice how both the RSI and MACD printed a lower point on the second peak giving a possible signal that a double top was forming. Prices have fallen from the double peak and formed a bear flag. However prices are now below that level as well. 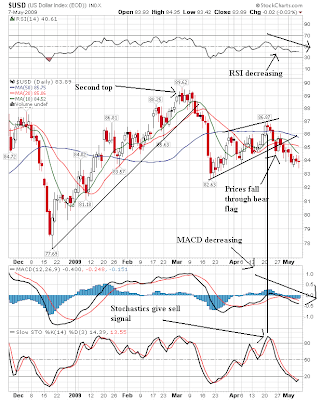 The daily chart gives us a better reading of the bear flag break down. Notice following events in the following order.

1.) Prices hit the top line of the bear flag. The stochastics give a sell signal

2.) Prices break through the lower line of the bear flag

3.) Prices rebound into the 10 and 20 week SMA but the Stochastics say sell. Also note the MACD has started to move sideways and is getting closer to giving a sell signal

4.) Once prices break through the lower support line the stochastics are less imporant because they are more of a pattern signal. Now the MACD becomes more important

5.) The MACD gives a sell signal a bit after prices move through the lower supoprt line.
Posted by Unknown at 6:35:00 AM