The recent NY Federal Reserve Manufacturing report had a series of questions related to borrowing -- specifically whether the need to borrow had increased or decreased, what the needs for new credit were for and what the perception of the credit markets was. Let's look at the responses (click for a larger image): 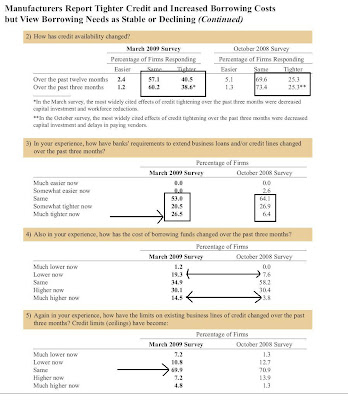 Question 2: Notice the increase from "same" to "tighter" from the last survey. However, also note the number of firms who responded "same" in the latest survey was 57% for the last 12 months and 60% for the last three months. That's a clear majority of firms.

Question 5: 69.9% of all respondents said the limits on the lines of creased were the same.

My guess is the firms that need money are the ones who are answering that credit is tightening and harder to get while the firms who have some type of cushion are responding things are OK. Again -- that's a guess.
Posted by Unknown at 11:30:00 AM