I'm going to start looking at indicators that tell us when we come out of a recession. It's important to realize up front there is no golden standard because the economy is far too complicated for that to happen. However, after looking at a bunch of data I'm pretty sure we can find some trends. So, let's start with PCEs -- personal consumption expenditures. PCEs comprise 70% of GDP growth in the US, so they are obviously important. I'm going to compare the year over year rate of change of PCEs and GDP to see what emerges. I'm going to use 20 years charts so the information is more readable. And -- as usual, please click on an image for a larger image. 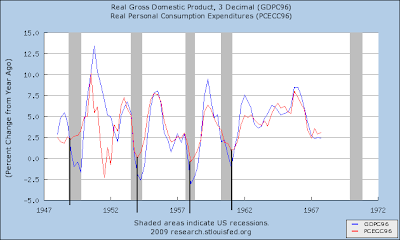 From 1947 - 1967 there were 4 recessions. In the first recession, PCES went higher first and GDP was very late in following. In fact, people kept spending throughout the recession. My guess is this is an anomily, as post-WWII pent up demand kept consumers spending as the country retooled its industrial base. PCEs increased in advance of the next recession and advanced in lock-step with GDP growht in the last two recessions. 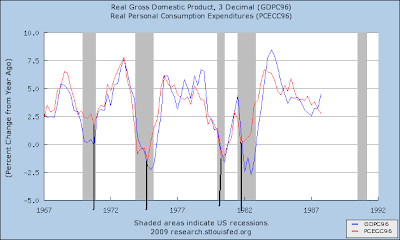 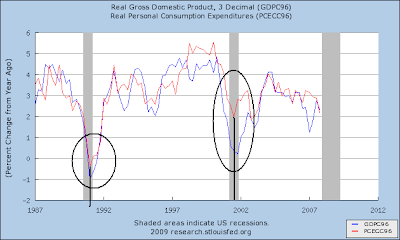 In one recession PCEs and GDP bottomed at the same time and in the second PCE bottomed before.

So -- since 1947 we have the following statistics.

PCES increasing before GDP: 4
PCEs increasing at more or less the same time: 4
PCEs not really paying attention to GDP at all: 2

So what conclusions can we draw?

1.) The possibility of the economy turning around without a YOY increase in PCEs is non-existant.