The Producer Price Index for Finished Goods advanced 0.1 percent in February, seasonally adjusted, the Bureau of Labor Statistics of the U.S. Department of Labor reported today. This rise followed a 0.8-percent increase in January and a 1.9-percent decline in December. At the earlier stages of processing, prices received by manufacturers of intermediate goods decreased 0.9 percent in February after falling 0.7 percent in the previous month, and the index for crude materials declined 4.5 percent following a 2.9-percent decrease in January. (See table A.)

There has been a some virtual ink spilled over the question of deflation -- that is, are we going into a period of deflation somewhat like that of the Great Depression. So far the evidence is a bit mixed. First, The change from the preceding month in core PPI has only been negative once in the last 12 months. This was November's -.1 decline. This tells me that so far the decline has to do with the commodity deflation over the last 9 months as this chart shows: 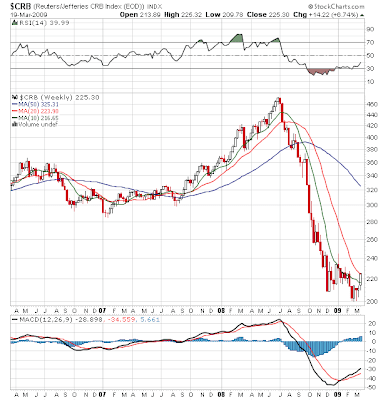 However, we have seen one of the biggest drops in overall PPI in an incredibly long series of data: 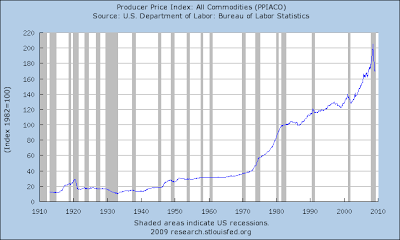 In addition, the year over year number is still scary: 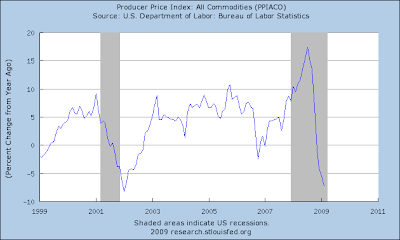 But also note in the above chart that prices have dropped at this level before -- in 2001 -- without the fear of deflation emerging.

In other words, from the PPI perspective, I'm leaning towards the "there isn't a deflation problem" conclusion.

The Consumer Price Index for All Urban Consumers (CPI-U) increased 0.5 percent in February, before seasonal adjustment, the Bureau of Labor Statistics of the U.S. Department of Labor reported today. The February level of 212.193 (1982-84=100) was 0.2 percent higher than in February 2008

Like the PPI data, the CPI data shows drop in 4Q of 2004 and increases so far this year. For October, November and December of last year there were drops in overall CPI of -.8%, -1.7%, -.8%, respectively, but in January and February of this year we saw increases of .3%, .4% respectively. More importantly, this appears to be a commodity related situation. The month over month rate of increase in core CPI for October - February was .0%, .1% , .0%, .2%, .2% respectively.

That does not mean there shouldn't be cause for concern. Consider this chart of CPI data 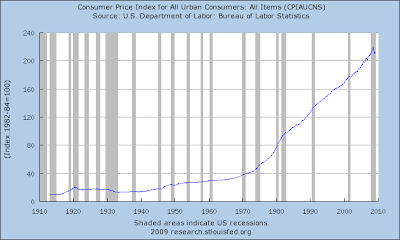 That's one of the largest drops in CPI the data has seen over the last half century. In addition, 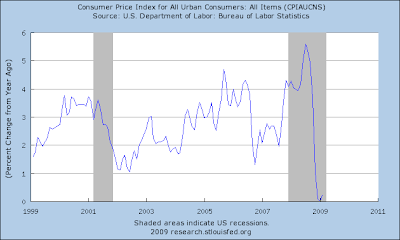 The year over year chart of CPI is ugly, and its far too early to tell if we're at the beginning of an upswing or not.

In general, it looks to me as though the price drops of the last 5 months are related and confined to the energy/commodity drops of the last 9 months. That does not mean we shouldn't keep an eye on these numbers. But the latest upticks in overall data and the lack of spreading to core numbers gives me the impression the "deflationary spiral" argument is losing steam.
Posted by Unknown at 9:30:00 AM