Industrial production fell 1.4 percent in February; the overall index has now declined for 4 consecutive months and for 10 of the past 12 months. At 99.7 percent of its 2002 average, output in February was 11.2 percent below its year-earlier level and was the lowest level since April 2002. Production in the manufacturing sector moved down 0.7 percent, with broad-based declines among its components. An increase in the production of motor vehicles and parts after the extended plant shutdowns in January, however, added nearly 1/2 percentage point to the change in manufacturing production. Outside of manufacturing, the output of mines moved down 0.4 percent, while a swing to above-average temperatures contributed to a 7.7 percent drop in the output of utilities. The capacity utilization rate for total industry fell to 70.9 percent, a rate 10 percentage points below its average from 1972 to 2008. This rate matches the historical low for this series, which was recorded in December 1982; the data for total industrial utilization begin in 1967.

-- IP has declined 4 consecutive months. That's called a trend. And this trend is not very good.

-- IP has declined 10 of the past 12 months. That's also called a trend. And this trend is not very good.

-- Industrial production is now below the 2002 level. Here's a relevant graph from the St. Louis Federal Reserve: 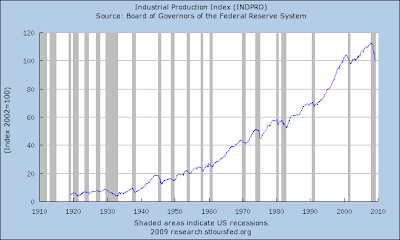 Here's a chart of utilization from the report: 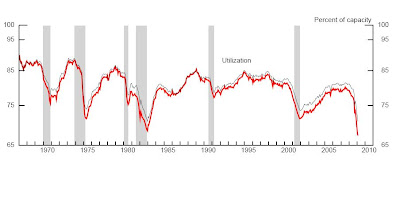 We're now at the lowest level of utilization in over 40 years.

There are two areas that stand out as the main culprits of the drop: construction and autos (consumer durable goods): 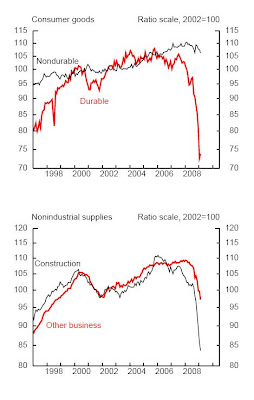 However, that does not mean everything is hunky-dory in other areas. It simply means those two areas are especially bad.
Posted by Unknown at 9:30:00 AM