The Empire State Manufacturing Survey indicates that conditions for New York manufacturers deteriorated significantly in February. The general business conditions index fell to a new low of -34.7. The new orders index also fell to a new low, the unfilled orders index stayed close to its recent record low, and the shipments index—despite a slight improvement—remained negative. The indexes for both prices paid and prices received held below zero, with the latter dropping sharply. Employment indexes remained deep in negative territory; the average workweek index slipped to a record low. The future general business conditions index was negative for a second consecutive month as many of the forward-looking indexes remained close to recent lows. The future index for number of employees fell particularly sharply, eclipsing last month’s record low.

Let's break this down.

Here is a relevant chart of the overall conditions:

Click for a larger image. The Gray lines are from the Empire State Survey.

Here are some more charts from the report: 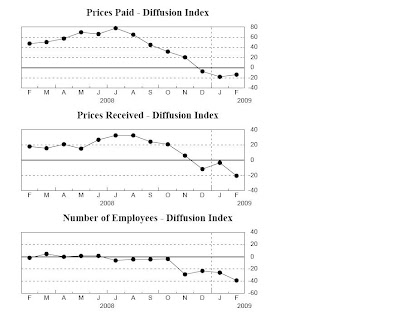 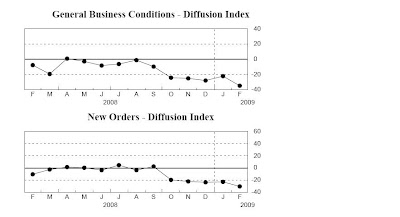 Let's take a look at some charts from prophet.net to see what various sectors are looking like right now:

Overall manufacturing is in a terrible way. Prices are below all the SMAs, the shorter SMAs have crossed below the longer SMAs and prices have run into upside resistance at the SMAs. Also note the heavy volume sell-off that started in the third quarter of last year.

Again, note that prices are near five year lows with the 10 and 20 month SMAs moving lower. Also note the heavy volume that started at the end of the second quarter/beginning of the third quarter.

In the industrial equipment sector, prices are below all the SMAs and the 10 and 20 week SMA are dropping. Also note the heavy sell-off volume at the beginning of the third quarter.

On the industrial equipment/component sector, all the SMAs are moving lower while the 10 month SMA is acting as upside resistance.

On the farm equiment chart note the extremely heavy selling that has been occurring over the last two quarters. Also note the 10 month SMA privided upside resistance to a recent rally

Diversified machinery is in the same boat as all the other sectors -- low prices, heavy volume and upside resistance from the SMAs.
Posted by Unknown at 12:30:00 PM