In contrast, prices for automotive vehicles increased in January, rising 0.2 percent after decreasing the previous two months. For the year ended in January, the index increased 0.7 percent.

Here's the chart from Econoday:

The Producer Price Index for Finished Goods rose 0.8 percent in January, seasonally adjusted, the Bureau of Labor Statistics of the U.S. Department of Labor reported today. This increase followed declines of 1.9 percent in December and 2.5 percent in November. At the earlier stages of processing, the decrease in prices for intermediate materials slowed to 0.7 percent from 4.2 percent in the prior month, and the index for crude materials declined 2.9 percent after dropping 5.3 percent in December.

What makes this news less scary is that core PPI has been increasing for the last five months when we've been seeing large decreases in the overall PPI. However, core prices of intermediate goods have been decreasing for the last four months and core prices of crude goods decreased throughout the fourth quarter of 2008 while ticking up slightly last month. In other words, there could be downward pressure on prices over the next few months.

Here are the relevant charts from Econoday:

The Consumer Price Index for All Urban Consumers (CPI-U) increased 0.4 percent in January, before seasonal adjustment, the Bureau of Labor Statistics of the U.S. Department of Labor reported today. The January level of 211.143 (1982-84=100) was virtually unchanged from January 2008.

The good news here is core prices are still positive for the last 8 months. This tells us that price drops are occurring in the food/energy area rather than overall. A big reason for the drop in CPI over the last half of 2008 was transportation costs. Here is a chart of gas prices from that period:

In addition, although agricultural prices have dropped over the same period: 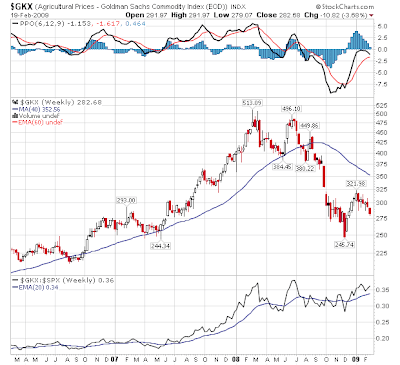 They have remained positive in the CPI numbers over the last half of 2008.
Posted by Unknown at 9:30:00 AM