What Got Us Into This Mess

The following is from a Barron's interview with Robert Albertson

Barron's: In 2006, you wrote that the consensus economic view was way too optimistic. What concerned you?

Albertson: There were three key trends that had been growing over the years. The first was that there was a complete reversal of global monetary flows. We had never had the emerging markets running the show on liquidity, and it became huge.

Do you mean in terms of emerging-market governments buying Treasuries and basically funding a lot of borrowing in the U.S?

That is right, essentially. So it dawned on me that the Fed[eral Reserve] no longer really had control. But more importantly, the money flows were distorting interest rates to the low side -- ridiculously so. Then, starting in 2003, the Fed compounded the problems by driving rates even lower.

What were the other themes that alarmed you?

The assumptions on home prices in the United States and elsewhere were clearly decoupling from any kind of reality. And third -- and I didn't notice this until about 2004 -- the consumer in America didn't go through a recession in 2000; we had a half-recession, if you will. So [consumers] continued to spend.

I looked at those three themes together, and I thought there was too much liquidity in the system, and that it was going to come back to haunt us.

Let's take these one at a time.

The first is what Ben Bernanke calls the Global Savings Glut. Essentially, less developed countries became net exporters while the industrialized world (the US and Europe) became net importers. When this happened -- especially from the US perspective -- dollars flowed outwards to the developing countries. This is how China and the Middle East were able to develop sovereign wealth funds. This money has to go somewhere. As a result, there was a lot of money sloshing around the world. Excess supply = decreased price = cheap money for an extended period of time. Add easy Al Greenspan on top of that and you have a world of trouble.

As for home prices, consider these charts from the blog Risk and Return 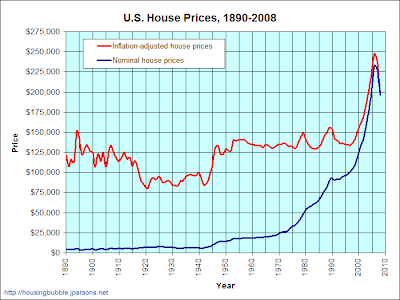 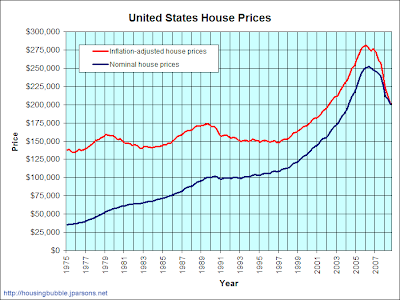 Remember -- markets eventually seek equilibrium. In other words, US home prices were way out of whack. This also implies we're nowhere near a bottom in housing.

And finally there is the US consumer. 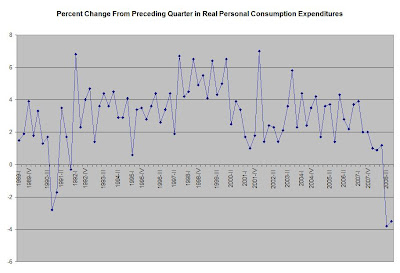 The US never stopped shopping. That means the US consumer needed to continually find new sources of money which means two things: 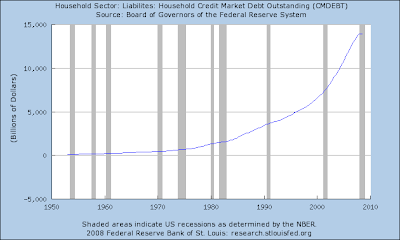 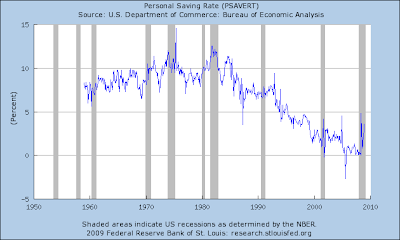 Now we get to retrench. That means we don't spend as much and save more. Which is great in the long run. But now we need a vibrant consumer willing to open his wallet -- and he's not going to be there like before. Notice the big bump up in the savings rate. People are now savings more than before.

In short, the US has to rethink it's economy right now. We're probably going to move from a high consumption model to a lower consumption more production model. That also means the transition will take longer during which our overall growth rate will be lower.
Posted by Unknown at 9:30:00 AM